The True Meaning of “Happy Hour” 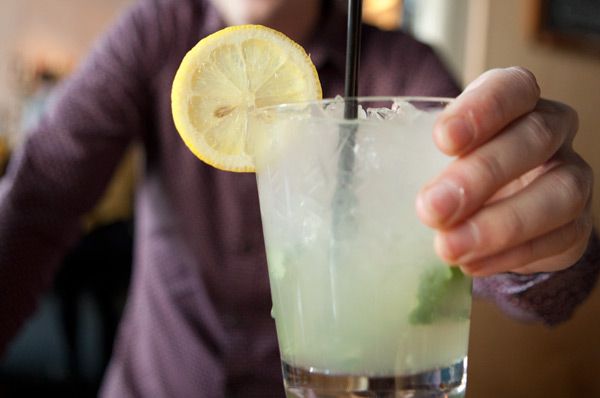 Today, the term “happy hour” is ingrained in communal cocktail thought, but its origins are unclear. Although a few facts are available, it’s fairly difficult to pin down the definitive history of how those two words first came together. In the 1920s, the phrase “happy hour” was used by the Navy for a period of scheduled athletic activity or other entertainment.

The first mention in print of “happy hour” in this context came in a 1959 Saturday Evening Post article. But it was earlier, in the 1920s, thanks to the failed experiment called Prohibition, when brave citizens gathered for pre-dining hours specifically focused on consuming then-illegal cocktails at a speakeasy or home bar. Eventually, the ideas merged, and people began using the phrase frequently to refer to a jolly time had when drinking with friends during the late-afternoon and early-evening hours. But I believe the notion of ebullient tippling with pals and gals before dinner dates back even farther. For example, in Shakespeare’s Henry IV, Part II, enthusiastic imbiber Falstaff says, “Come, I will go drink with you, but I cannot tarry dinner.”

It only makes sense that such a time would be revered. You’ve just completed a hard day’s work and aren’t quite ready to head home or to weigh yourself down with a meal. But you need to shake off the day and kick up those heels. What can possibly be better than going into the perfect establishment to partake of cocktails and convivial chatter?

Picking that perfect place, though, can be a little tricky; it must be a bar, lounge, saloon, tavern or watering hole that meets some very specific criteria. For one, the bartender must be approachable and amiable. Second, that bartender must make a dandy drink—one that doesn’t overwhelm the taste buds, but rather, entrances, and one that isn’t served in a trough-size receptacle. As celebrated wine writer André Simon wrote in his 1948 book, Drink: “The cocktail is intended to be like unto a bugle call to meals.” Third, the place in which you’re spending a happy hour should allow for conversation both intimate and joyous. And, finally, the establishment should have a different atmosphere at happy hour than at other times, adding to the uniqueness of those hours. The downtown lounge that’s cuddly early on and a cattle yard later, the out-of-the-way nook that’s candlelit after work, but then hosts (shudder) an open jazz night, and the hip restaurant bar that shifts to serious food service after 7 p.m.—they all call to me and rarely disappoint during those peak hours of cheer.

If you’ve had a bad day at the salt mine, happy hour must lift the weight from your shoulders and put you right for the evening. If you’re getting ready to have dinner with a set of new in-laws, happy hour is necessary to steady the nerves. Happy hour has to remind us that whatever came before or whatever might come afterward, right here and right now, for these few hours, all is well—and well shaken—with the world.

Especially in the Northwest, where the very atmosphere outside can seem to be against us with pelting rain and unrelenting clouds, the right happy hour is a beacon of light and laughter. Remember, as Joseph Spence said a few hundred years ago, “There’s always sunshine in a pub.” Just be sure to pick the right pub.