The Truth About Bigfoot

From canyon to cave, the Sasquatch legend persists. 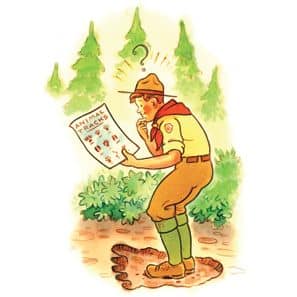 Rumors have circulated for years that Washington’s Cascades are the native habitat of Bigfoot (aka Sasquatch). Some certainly emanate from events that occurred (or not) one evening in 1924 in a canyon—ever since known as Ape Canyon (elevation: 4,200 feet)—southeast of Mount St. Helens. A group of miners shot at a mysterious 7-foot-tall apelike creature that was milling around the makeshift cabin they had built in the canyon to assay a nearby claim. That night, as the miners tried to get some shut-eye, their cabin was reportedly pelted with rocks, logs and other forest debris by a band of at least three of the “Big Foot” ape creatures—the miners later measured footprints at up to 19 inches long. In the morning, the story goes, the miners came upon and shot one of the ape creatures, which fell some 400 feet into the canyon, presumably to a certain death, although no remains of any kind were ever recovered. While other alleged Bigfoot “sightings” have occurred throughout the Pacific Northwest and beyond, the events that took place (or not) at Ape Canyon in 1924 will forever stand as the beginning of our fascination with the legend. These days, you can check out Ape Canyon while visiting the lesser known south and east sides of Mount St. Helens National Volcanic Monument. On the other side of the mountain lies Ape Cave, which may also have a connection to Bigfoot, but only because a troop of Boy Scouts, sponsored by a group called the St. Helens Apes, explored the cave extensively in the 1950s. Alas, they found no evidence of previous human—or semihuman— habitation. The St. Helens Apes, incidentally, were mostly foresters, and their name may have come from “brush apes”—a nickname for foresters—and not from the legend of Bigfoot.