After Spate of Closings, Georgetown Artists’ Hub Rises When We Need It the Most

A performing arts space in the South End offers its founders, and area artists, a place to call home in a swiftly changing city. 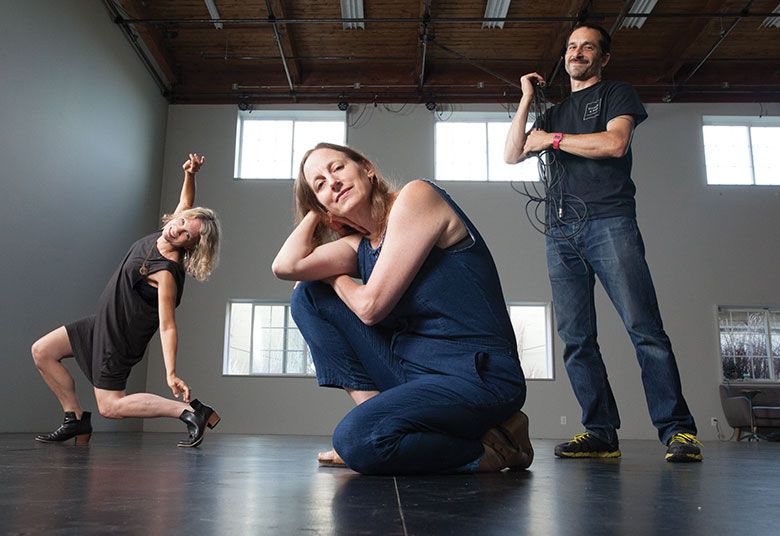 Dayna Hanson, Peggy Piacenza and Dave Proscia are experts in the hustle, resourcefulness and stamina that are so often required in making art. For the past 25 years, Hanson and Piacenza have worked as dancers and choreographers, both together, with the D-9 Collective and 33 Fainting Spells, and independently. Proscia, whom the dancers first met at On the Boards in 2001, is a longtime lighting designer, technical director, performer, visual artist and musician. The trio has shared credits on many projects, including Hanson’s 2013 feature-length dance-and-music film Improvement Club (which, incidentally, happens to be about a performance group struggling to make art).

The real-life struggle, Piacenza says, is made even more exhausting when it comes to rehearsal space: There’s never enough affordable, available, close-to-home space in which to practice or present new work. “The OK Hotel—remember that?” Piacenza asks, referring to the famous arts venue in Pioneer Square that closed after the Nisqually Earthquake in 2001. “There was also Red, a small space off First Avenue,” she adds. The rehearsal space obits continue: the Polson Building, the Washington Shoe building, 619 Western, Oddfellows on Capitol Hill. (The last still stands, but it used to teem with small theater groups as well as Velocity Dance Center, which has since moved elsewhere on Capitol Hill.)

Piacenza had reached a turning point in her life a handful of years ago. She had completed a degree at Smith College. She was nearing age 50. She had spent a lot of creative energy to make and produce a full-length solo “movement memoir” show called Touch Me Here—renting out Washington Hall in the Central District for performances—and she realized, “I was ready to make a commitment. And that meant finding a space, a space where I could say, ‘This is where I work. This is where I go to create. An actual base.’”

So, the dancer batted around an idea with Hanson and Proscia, a couple, about going in together on their own dance studio so they and others needing space could create their work.

The trio connected with Sam Farrazaino, a sculptor and developer who was expanding his 30,000-square-foot, Georgetown-based arts complex, Equinox Studios, into what’s now a sprawling 100,000-square-foot site. With financial support from friends, a $10,000 crowdsourcing campaign and grants, Base: Experimental Arts + Space opened in August 2016.

Because they got on board early on—before Farrazaino’s warehouse was divvied up with walls into a site that now accommodates 125 artisans, from blacksmiths and ceramists to photographers and fiber artists—the three were able to design exactly the space they wanted: a 2,000-square-foot, rehearsal/performance rental space with a sprung floor (which absorbs shocks), theatrical lighting and sound system, an office loft, a kitchen and mirror-less walls. “We’re not cluttering it, so anyone walking in here has an open slate,” Proscia says.

Base’s open slate has suited a spectrum of creatives, from newly minted Cornish College of the Arts choreographer Laura Rodriguez, who self-produced her first post-college show here, to established theater performer Frank Boyd, who used the space to work with actor Libby King on their upcoming On the Boards work, Patti & The Kid. Boyd is one of three 2017 Base artists-in-residence in a four-week-long residency program at the core of Base’s mission statement: giving artists freedom to experiment and take risks by providing an actual physical space. Base hosted two artists-in-residence in 2016.

“With the pace of development in the city, it feels like artists have to work harder and harder to afford rent. We’re trying to make it more livable,” Piacenza says.

“Or at least easier,” Proscia adds.

This month, resident multidisciplinary artist Ilvs Strauss will be working on a video/dance/narrative work. In November, dancer and choreographer Markeith Wiley will spend his residency working with his new performance group, The NogoodDoers.

For Wiley, the fact that he would be inhabiting a new space that was not on Capitol Hill but somewhere entirely different (“There needs to be more arts in the South End,” he says) made him excited—that, and the luxury of having hours of rehearsal time for whenever he wanted. “To think I don’t have to worry about somebody’s schedule working with mine, or some studio double booking. That’s magic!” Wiley says.

That’s the point of Base, says Piacenza—that precious, creative wiggle room that’s getting harder and harder to find in the city. “There is no expectation that you produce anything while you’re here,” Piacenza says about the residencies.

“But you can,” Hanson adds.

Coming up at Base