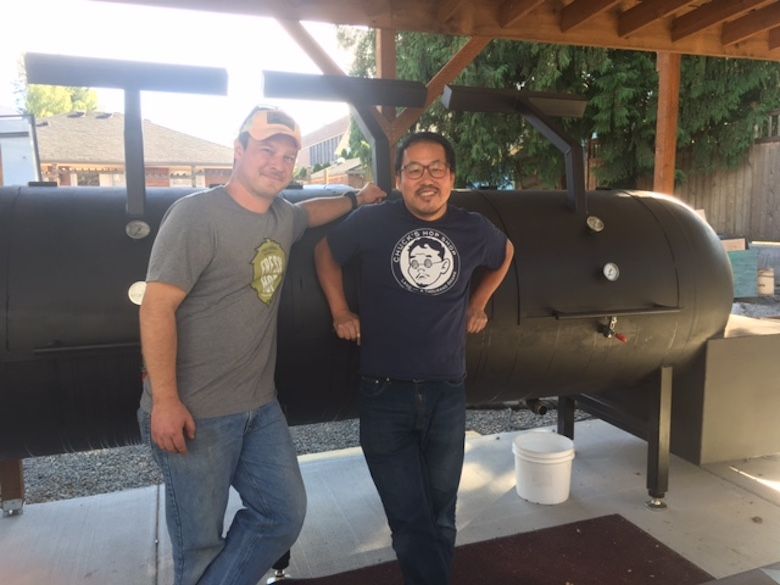 Is there a better pairing than beer and barbecue?

Is there better news than a beer-and-barbecue shop opening in your neighborhood?

I’ll admit that I’m perhaps overly enthusiastic about the opening of Barbecue Smith—the new restaurant partnership between industry newcomer Jason Jacobs and Chuck’s Hop Shop proprietor Chuck Shin. My ‘hood, Maple Leaf, doesn’t exactly have a surplus of wonderful, walkable restaurants and bars. So when the Coa space at Roosevelt Way NE and NE 80th Way closed a few months ago, I started eagerly anticipating the sort of place that could open just blocks from home. Then, they moved in a huge custom smoker. And then I found out that Shin was involved. (Cue fireworks.)

The two owners are longtime friends—Jacobs says he was one of Shin’s first regulars at the original shop—but Jacobs has been a plumber the last 15 years, barbecuing at home in his free time. Now he’s the acting pitmaster of the restaurant, which will hopefully be open in the next few weeks. He’s mostly self-taught, though he was a plumber on Jack’s BBQ in Georgetown when it opened, and has since buddied up with owner Jack Timmons, who helped Jacobs hone his brisket recipe. Before you find out the hard way: He’s not even from Texas. (He grew up in Edmonds.)

But still, Shin swears Jacobs’ barbecue is first rate. “My dad is a pretty old guy, and even he says it’s the best chicken he’s had in his life,” Shin says, laughing. The secret, Jacobs says, is in the brine, which leaves the chicken moist and flavorful throughout. His ‘cue, Shin says, doesn’t need sauce—though they’re making a slightly sweet and a spicy variety in house—but still has a touch of sweetness from the combo of applewood and hickory wood used in the smoking process.

Besides chicken, Jacobs will be making the requisite brisket, plus pork ribs, pulled pork and once-a-week beef ribs, plus specialties like smoked meatballs stuffed with mozzarella and smoked salmon sliders. He’s hoping to add a weekly steak night and try out some reverse searing technique. Sweet tea will always be available—for free!—and sides will be pretty standard: coleslaw, mac ‘n’ cheese, collard greens, black eyed peas and (perhaps most awesomely) Shin’s mom’s kimchi. Plates will be around $15, but you will also be able to buy meats by the pound.

Of course, no place of Shin’s would be complete without an impressive beer program. The back of the space—built like an old house—will be a bar area with seats for 15 to 20, offering 27 mostly local beers on tap. Some of those beers will be collaborative projects made through Chuck’s Hop Shop like the recent Stoup Brewing Coastal Confusion IPA.

There have been a couple of soft openings to try out the grill, and they’re hosting a fundraiser for Hurricane Harvey victims on Sunday, September 17. Tickets are $25 and can be purchased here—not many are left, so get on it if you’re interested. For a final opening date, follow along on Facebook. I’ll see you opening week.