As our obsession with open-faced noshing continues, we explore a range of toasts in Seattle 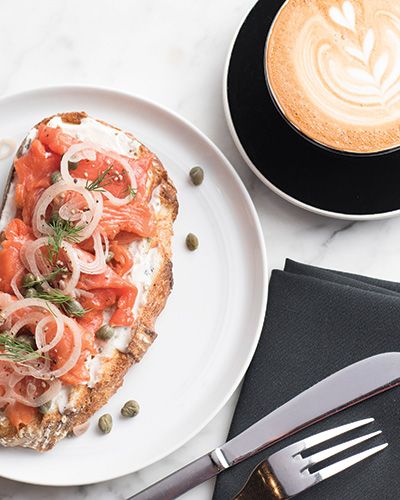 As with many things in Seattle’s culinary scene, we can probably credit chef Renee Erickson for convincing us that $10 is not too much to spend on toast. (My grandmother, however, wouldn’t have been so easily persuaded.) Mind you, the single slice of toast that goes for more than a 10-spot here isn’t simply topped with jam or cinnamon sugar—that would be the $4 “artisanal” toast that made San Francisco headlines in 2014. And let’s not even get started on avocado toast. At her restaurant The Whale Wins, Erickson tops her toasted slice, made with bread from Sea Wolf bakers, with Matiz sardines ($14). Each bite of it is worth every penny, and the five toasts that follow also (for the most part) justify the price tag.

Little Brother
Bright and cheery, this younger sibling of Kirkland’s beloved Deru Market expertly walks the line between simple and sophisticated. There’s an alluring assortment of pastries in the front case, but much of the breakfast and lunch menus are made up of tartines—open-faced sandwiches with toppings that range from house-made almond butter and honey to wild mushrooms and goat cheese. Our pick: The house-made country bread is cut thick and buttered generously. Try it with chopped poached eggs, salty steelhead roe and fresh herbs ($8); it’s also available on a seeded gluten-free loaf. Kirkland, 456 Central Way, no phone

Mr. West
This utterly enchanting downtown corner café serves lattes in the morning and cocktails in the evening, with a light menu—focused primarily on a few toast options on weekdays and waffles on Saturdays—prepared in the café’s central, open kitchen. Our pick: The house-cured salmon ($9.50) toast is a tip of the hat to the New York bagel with lox: Capers, pickled shallots and a few sprigs of dill top a whole mess of soft, house-cured salmon, with a smear of crème fraîche standing in for the cream cheese. Order it on Grand Central sourdough; multigrain is also an option, though it’s not as tasty here. Downtown, 720 Olive Way; 206.900.9378

The Atlantic
All reclaimed wood and macramé plant hangers inside, this relative newcomer probably would have gone overlooked in another ’hood, but it’s a welcome addition to this developing section of the Central District. The menu is American comfort food at its core—burgers, wedge salad, a mean brunch, etc. Our pick: At $12, the only toast on the menu is the smashed avocado toast—Macrina rye topped with a spread of Dijon, crunchy disks of cucumber, and a scattering of pepitas and sesame seeds—and it just squeaks in under the limit we’re willing to spend on avocado toast. For just $1 more at dinner, you can get a burger. Central District, 2519 S Jackson St.; 206.329.5499 Photograph by Chustine Minoda
Smashed avocado toast from The Atlantic The London Plane
Maybe it’s the intense light that floods in through the soaring windows, or perhaps it’s the flower stand just inside the door, but to have lunch in this special Pioneer Square space feels like eating in an atrium—particularly from the mezzanine seats. You’ll notice bread on nearly every table, and there’s a reason for that: Bread baker Michael Sanders’ house-made sourdough, with which all of the toasts are made, is the stuff of local legend.
Our pick: The toasts here, like the rest of the menu, change seasonally, except for the hazelnut butter with honey and sea salt ($9). If available, the butternut squash toast with crunchy kohlrabi and apple ($14) is as tasty as it is gorgeous—just know that you’ll need a knife and fork to get through it. Pioneer Square, 300 Occidental Ave. S; 206.624.1374 Preserve and Gather
Though you may be most taken with the décor of this darling Greenwood coffee shop—most notably the impressive geometric design painted on the eastern wall—the place has the bravado (and baked goods) to back up its beauty. The toasts here are exactly what you’d expect from toast (made with Sea Wolf bread) in the traditional sense: nothing overly prettied, but house-made (with jam or savory toppings), and none for more than $5. Our pick: The pickled egg salad ($4.50) on seeded Sea Wolf bread is tangy and hearty—small enough for a savory snack but substantial enough for lunch, with one of the excellent peanut butter cookies to follow. Greenwood, 358 NW 85th St.; 206.403.1149