Q&A: Kyle MacLachlan on Being an Ambassador for Washington State Wine

The "Twin Peaks" and "Portlandia" star has been making wine in his native Yakima for more than a decade. Could a wine dinner at Twede's Cafe be coming soon? 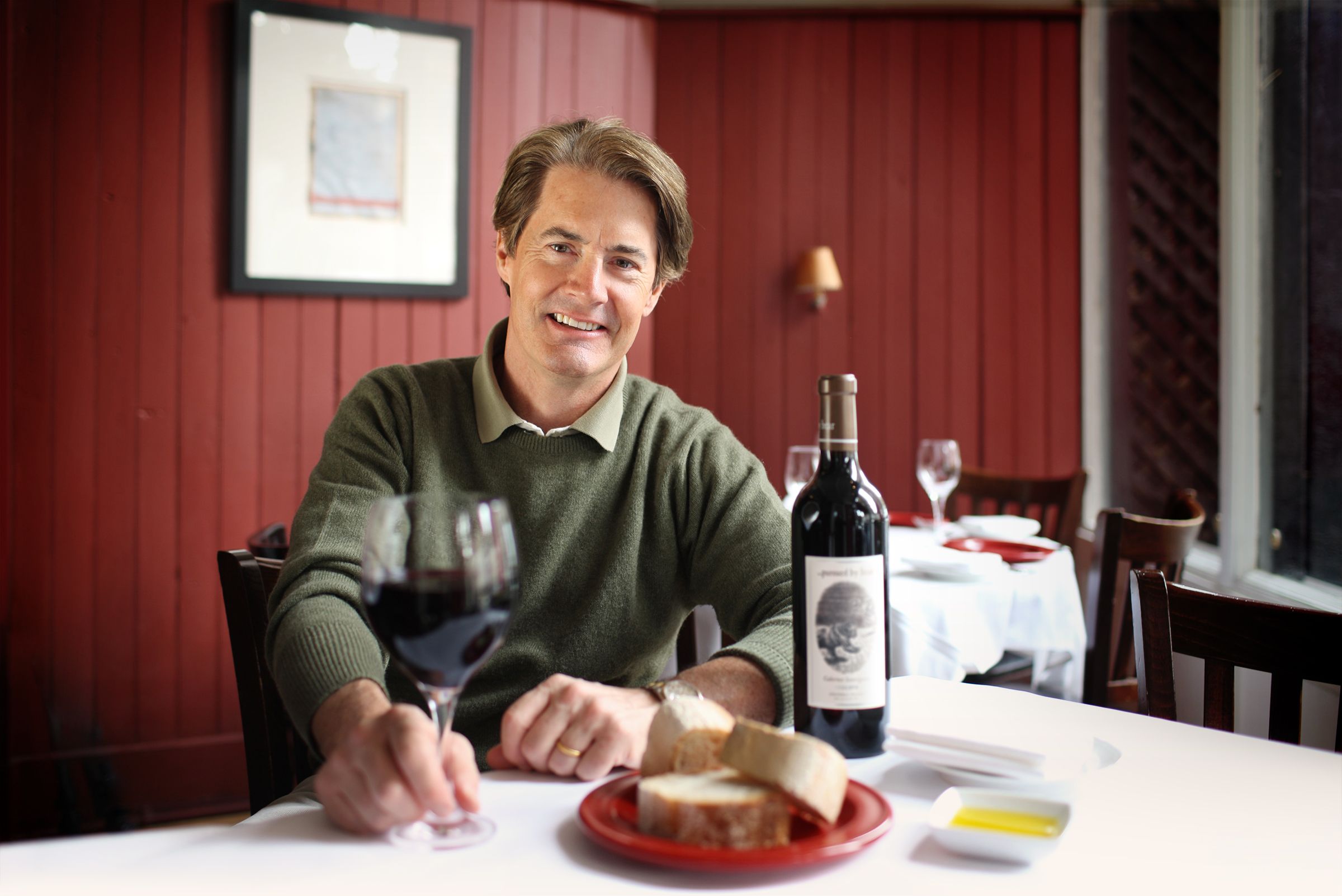 Acclaimed actor Kyle MacLachlan has brought indelible charm and a quirky sophistication to portray memorable Northwest characters like Agent Dale Cooper in the Twin Peaks and the mayor of Portland in Portlandia.

What began as an unabashed love for his home state and a desire to stay connected to his family roots has become a true passion and dedication to the craft of winemaking. MacLachlan has become an advocate and evangelist for the unique properties and flavor profile of Washington state wines. He is personally involved in every aspect of Pursued by Bear wines made in partnership with winemaker Dan Wampfler.

Seattle magazine: How did your interest in wine begin?

Kyle MacLachlan: I wasn’t a beer drinker in high school. I was influenced by my girlfriend at the time whose parents would serve us wine – I thought that was pretty cool and felt very grown up. And then when I moved to Los Angeles, the proximity to Napa was irresistible. I would go up and just stumble around, drop into wineries.

I was also paying attention to what was happening in Washington, in my home town and down in Walla Walla. I started drinking Washington wines and thought they were tasting pretty good, which led me to more exploration up there where I met Eric Dunham (owner and winemaker for Dunham Cellars in Walla Walla, who passed away in 2014) in early 2000’s and started a friendship. I asked him if he would partner on a wine project with me in 2005. I was very interested in learning more about it, but didn’t quite know what to do and Eric really provided the opportunity for making wine at Dunham Cellars.

SM: Why did you choose to make wine in Washington as opposed to California?

KM: Because of my hometown connection, I liked the fruit, and it was less expensive. I certainly looked at Napa, but I didn’t know anybody there that would sponsor me or front me. And to buy a ton of grapes there is so expensive. And my wife also said, “You should make it in Washington. That’s where you’re from. That’s your story.” She recognized early on that wine is so much about the story. I also thought it would be a good thing to bring me back home. I wasn’t spending enough time with my dad. And as I was getting older, I wanted to spend more time with him.

SM: What is it about wine that holds your attention? What do you love about it?

KM: The surprise. You have this bottle that’s gone through so much just to get in front of you in your hands. So many people have put a lot of effort and work into it. It’s taken a lot of time. It speaks of a certain place and time. I like opening it and having that experience and tasting the labor of all these people. The look of it. The way the label is. The cork, the foil, all of the little bits and pieces that go into it. The bottle, the weight of the bottle. Then, of course, tasting the wine and what are the flavors that I get, what do I like it with. The best things are about the communal aspect, you know, bringing it somewhere to have with friends and other people that share the same passions. Or really exposing someone that doesn’t know anything about wine to Washington wine.

I love talking about it. I’m a little bit like an ambassador for Washington wine. Living in New York and telling people which wines to check out. I like to keep the focus on Washington State.

SM: You grew up in Yakima, which is now the heart of the Columbia Valley AVA, but it was hardly known for wine during your childhood. What has it been like watching your hometown turn into wine country?

KM: I’m excited about it. There wasn’t much sexy about Yakima prior to the wine business. It was a nice place to grow up. There’s a beautiful downtown theater – Capitol Theatre – and that was cool, but it was mostly known for growing hops and mint. When the wine thing kicked in, it boosted the profile and the economy. Good wine attracts creative people like chefs and supports this whole culture that will drive tourism.

SM: Why make your own label? Why throw your hat into the winemaker ring?

KM: I think I’m a glutton for punishment, that’s what it is. I wanted to learn more about wine, but I am not good at remembering names and vineyards and labels and winemakers and French/Italian labels. Pour something in my glass and if it’s really tasty, I’ll look at the bottle and start to learn more about it. I don’t have an encyclopedic mind like that, but I do like to learn what it takes to make something. So I thought, the only way to do that is if you get involved in the process. All this hardware goes into creating, ultimately, this wonderful tasting juice. I wanted to know more about that.

And then the vineyards. I wondered, where are they in Washington? Suddenly I began to look around the state with totally different eyes. The Horse Heaven Hills – in the past it seemed like this desolate place and who would want to go there, but now I’m like: I want to go see what they’re growing there. I remember driving on the Oregon side of the river to go see my grandparents and you look back up on these ridges on the Columbia River and it looked kind of stark and overwhelming. Why would anyone live there? It’s just brown. And then you get up there and you see these vineyards and you see that it’s actually quite beautiful. So I came to Washington with different eyes.

SM: You’ve had your own label for more than a decade and watched the Washington wine industry change quite a bit. What are some changes you’ve noticed and what are excited about?

KM: When I got involved in 2005, I thought, “Oh God, I’m too late.” There were already so many wineries that I wish I’d started ten years earlier. And then, of course, cut to now and it’s like, “Oh, wow, I started at a good time.” There are just so many wineries now. It’s difficult to get attention and to tell your story. One of the great things about Washington is that people from Washington love Washington wine and support their home state. Even if they go south for the winter, they will order up Washington wine before they order anything else. You can get a great bottle of Washington wine that is very satisfying for much less than a Napa cab. And sometimes surprisingly even better.

I’ve watched more people come to make wine. Eric taught me the Musketeers’ creed – one for all, all for one – in other words, everybody supported everyone else. I carried that as one of the life lessons from him out into the world. He taught me that and it continues. There are guys who are making huge names for themselves like Charles Smith, Quilceda Creek, Betz, Andrew Will, Leonetti, of course, and Drew (Bledsoe) at Doubleback. As the big boys expand and continue to grow, they are bringing along everybody. That is an important thing. There is room for everyone. That is part of the creed of Washington state winemakers.

SM: As you were filming Portlandia, you were probably exposed to some Pinot Noir. Any plans to add a Pinot to your roster?

KM: Yeah, there’s a fair amount of Pinot in that area. I appreciate a Pinot Noir, but I need something that’s got more viscosity to it, a bigger mouth feel. Before I went with a Pinot, I would probably experiment with a white varietal.

SM: Do you have any plans to have an estate vineyard at some point?

KM: Yeah, maybe someday. I don’t have any backers at this point and it’s a big outlay to buy the land. The upside is that you have it and it’s yours and you can farm it the way you want to farm it. It would be cool to have at least part of the production come from an estate vineyard. But I like to be able to choose fruit from all over the state from locations I think are exceptional.

SM: What are your favorite things to pair with each of your wines?

KM: I am really no holds bar. Cabernet, I’ll drink it with just about anything. Both Cab and Syrah will go with meat or pizza, burgers. I might even do the Syrah with salmon, but I’ll probably pull a rosé out for salmon. It kind of just depends on the preparation and fat content. I was even thinking of rosé for Thanksgiving with the turkey, then you can move to the Cab or Syrah for dessert. Or just having a nice glass of wine – you don’t have to have anything with it. The flavors are nice.

KM: No. No, I don’t eat much cherry pie. It’s not on my diet first of all. But that cherry cola flavor is such a part of the flavor profile of Washington in Cab and Syrah, both. The Syrah I make has a kind of chocolate, cocoa quality to it as well as a bit of spice, but it’s more of a rich Syrah and not too peppery.

SM: It seems like it would be appropriate for your wine to be the house wine at Twede’s Café.

SM: I think you should have a winemaker dinner there.

KM: I like that idea. I support that idea. Let’s talk to Noble (distributor) and see if they can put that together. We’d have a good turnout, I bet.

Pursued by Bear is available in Seattle at Esquin Wine & Spirits, 2700 4th Avenue S. (madwine.com) and in select restaurants. Order online at pursuedbybear.com.