The newest iteration is a cozy, convivial spot with great cocktails 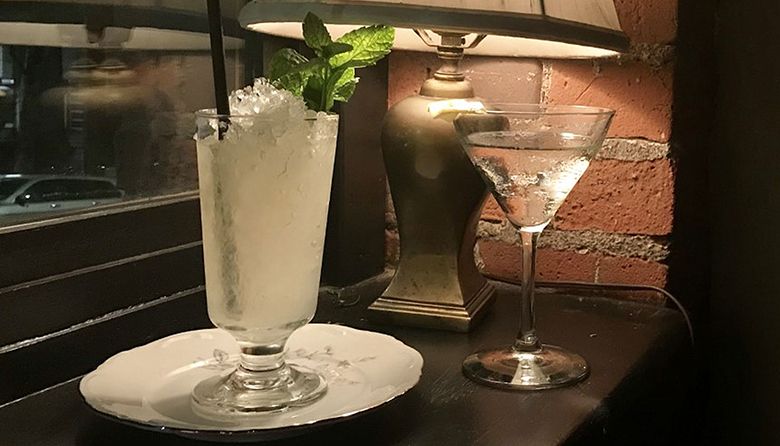 At its prime, Queen City Grill was a Belltown institution. The last couple of years have been hard on the restaurant, which has been open since the ‘80s and recently plagued with landlord disputes, reinventions and finally closure. But in September, Linda Derschang and The Derschang Group (Smith, Linda’s Tavern, Oddfellows, Little Oddfellows, and King’s Hardware) reopened the spot as simply Queen City. This latest iteration has a more relaxed feel, while keeping the quality of the food and cocktails high. There’s also an overall warmly welcoming nature that’s already coaxing in folks from the neighborhood and beyond.

While it’s a different animal, they maintain shout-outs to the past, starting with a martini atop the menu (and available for less during happy hour)—Queen City Grill was a martini spot. Today, Derschang Group’s talented and remarkably amiable beverage director Myles Burroughs serves the martini using London’s Sipsmith gin, Boissiere dry vermouth, and a touch of lemon oil, all nitrogen-infused and served off the tap. This process enhances consistency, but also, Burroughs said, “aerates and opens up the vermouth,” which lets its botanicals mingle more openly with the gin’s summer-and-citrus nature. Garnished with a lemon peel or olive, it’s an exceptional martini—and I’ve had a fair amount.

The cocktails will rotate seasonally: This week, a winter menu was just unfurled (I’m extra-curious to try to the Hot Hot Charlotte Charlotte with Hendrick’s Gin, St. Germain elderflower liqueur, lemon, cucumber, and the intriguing “Hot Hot Sauce Sauce”). You’ll discover a tight but well-thought-out list of natural, organic wines, too, beers on tap and in cans and bottles, and some shot-and-a-beer combos. None of the bar menu feels overwhelming, just intentional.

The food menu, also rotating depending on produce availability, from chef Will Richey mirrors this. There are only six starters, seven mains, and one dessert, but the selection and balance is appealing. It’s comfortable food, classic Americana in a way, but with accents spinning that description. Take the Deviled Eggs. Made with a house-vinegar aioli and small whole mustard seeds, and garnished with a mustard curl and paprika, they maintain a best-of-breed smooth charm, but with a zingy footprint that rises above the flock. The Smith Burger (which, as you might expect, is the same as at the restaurant Smith, where Richey has also led the kitchen, along with Tallulah’s and Red Cow) has been a big hit so far, and the squash gnocchi with lion’s mane and matsutake mushrooms, Caciocavallo cheese and mustard frill was like fall in a bowl.

Don’t miss unique touches in the long, lean, restaurant’s décor, such as vaguely vintage paintings on some walls and a stuffed duck, porcelain horse and old pictures on and around the lovely wooden bar shelves framing a hefty half-moon mirror behind the bar. Dark wood abounds, from big-windowed booths along the Blanchard street side, to the bar itself and the small tables nearer First Avenue. While the lighting is low, the personality is convivial, with friendly staff (our server on a last visit, Melissa, was extra nice) and solid music—the Sunday evenings classic country playlist is choice. With the food, the cocktails and the vibe, it’s easy to see why barstools are a hot commodity and why tables fill up quick.

Two final important notes: Derschang let us know that there are ghosts haunting the bar—a younger one and an older one, known to whisper in the staff’s ears. You’ve been warned! And don’t miss the black-and-white photo on the right-hand wall just past the open kitchen on the way to the bathroom. It’s a pre-1900s pic showing the saloon from here dating who knows how many years back. Everyone in the photo seems to be having a good time—I think they’d like it today, too.