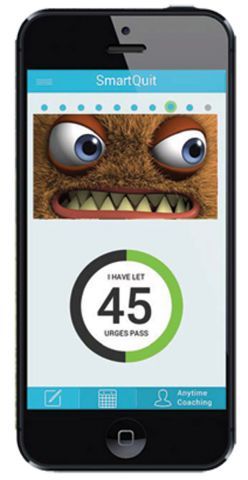 A half-century ago, in the Marlboro Man’s heyday, nearly half of American adults smoked. Far fewer light up today, but the 20 percent who do face steep odds when they try to quit: According to the American Cancer Society, only 4–7 percent of efforts to quit smoking succeed without medicines or other assistance. Now, there’s an app for that. Last fall, psychologist Jonathan Bricker, Ph.D., of Fred Hutchinson Cancer Research Center and the University of Washington, received a $3.1 million, five-year grant from the National Cancer Institute (NCI) to study SmartQuit, a smoking-cessation smartphone app offered free to Washington residents through the Department of Health (doh.wa.gov).

Bricker is an expert in acceptance and commitment therapy, or ACT, which SmartQuit employs to help smokers mindfully accept urges to smoke without acting on them. According to the Department of Health, SmartQuit boosts quitting success rates threefold; the NCI grant will fund a randomized, controlled trial to yield greater insight into how this marriage of mindfulness and tech can help more smokers clear the air, for good.

Sober: Why Dry January Means Something Different to Me

An alcoholic reflects on his journey

I was nearing the end of my screed against holier-than-thou practitioners of Dry January when I came to a startling realization: My brain was broken. This was somewhat alarming as you might imagine, but not totally unexpected. As with many crises, it happened slowly at first and then all at once. Years of arguing on…

Letter To Seattle: Grown-Up for a Day

Dear Junior Achievement of Washington, My name is Tigran, and I am a sixth grader.  Last year, when I was in fifth grade, I visited BizTown with my class, and I wanted to tell you how that field trip made a difference.  To prepare for the visit, my class and I spent time with our…

Big data says you love the outdoors. You exercise regularly and have an almost religious commitment to vitamins. You have a keen focus on integrative medicine. A comprehensive survey by Life Extension.com finds that Washington state ranks a lofty No. 4 in the United States for health and wellness. The Florida-based wellness company examined CDC…

A new kind of healthcare is coming our way.

If you call Seattle home, you already know that a healthy, active lifestyle is a big part of what makes our city great—and that feeling good is what living your best life is all about. That’s why Seattle is the latest destination for Crossover Health, innovative healthcare that’s changing the game for employers and employees…