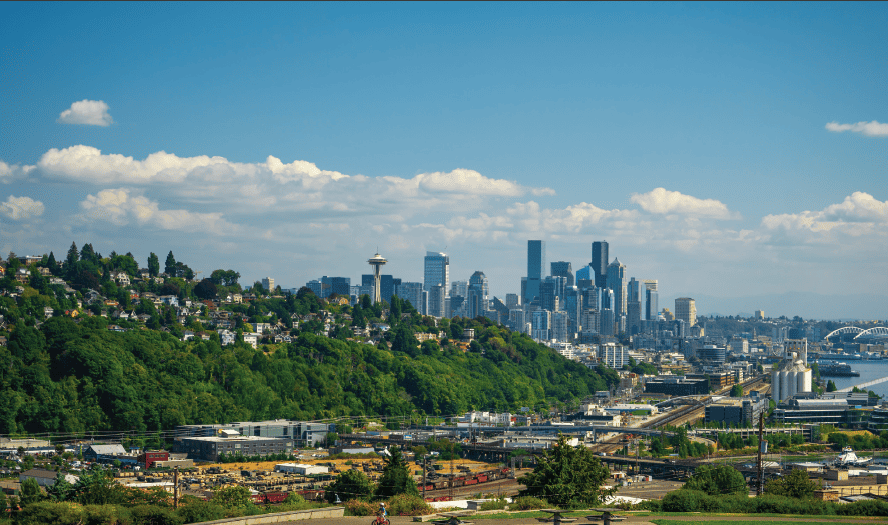 David Birkner has been a Wharton economics student, a naval oﬃcer stationed at Pearl Harbor, a travel agent, a freelance writer, a pioneering environmental activist, an outdoor guide, an elementary school teacher and a successful entrepreneur.

But mostly, the 86-year-old walks – on all ﬁve continents, from the southernmost tip of South America to North Africa to New Zealand to Nepal. Each year he devotes three weeks to international destinations and seven weeks to domestic hiking trips.

The Chicago native was instantly smitten with Seattle, but it was nothing compared with his ﬁrst glimpse of Mount Rainier in 1959.

“It had been cloudy for several days, and suddenly the weather cleared. It took my breath away,” says Birkner, who moved to Seattle permanently in 1963 after being stationed in the U.S. Navy. “I grabbed the arm of the girl I was with so tight that I was afraid I had cut oﬀ her circulation. It was the most beautiful thing I’d ever seen. I was spellbound. It was a magical moment that has never left my memory. It’s like an old, dear friend.”

Since then, he has hiked Mount Rainier hundreds of times. He estimates he’s walked all 300 miles of its trails during the months of the year when they’re cleared of snow. He’s hiked almost all 423 national park sites in the U.S. He’s climbed countless mountains in the Americas, Asia, Africa and Europe.

Birkner is his own beast of burden. In Hannibal-like fashion, he walked through the Jungfrau (“the top of Europe”), the Eiger and the Mönch in the Bernese Alps, but didn’t need elephants. He let others ride the camels on a Saharan trek with Tuaregs. He bumped noggins with a mother bear on a Northwest hike, and held the trail.

He kicked the tires on a leper colony on a Paciﬁc isle. A long hike through the Himalayas put him in successive intimate contact with three homogeneous cultures: Muslim, Hindu and Buddhist. He created the Heritage Institute, an experiential school for teachers to learn about the national parks of the Paciﬁc Northwest. He sold it in 1994, using the proceeds to travel.

When he was in his early 30s, Birkner testiﬁed before the U.S. Senate in favor of the establishment of the North Cascades National Park. His comments would foreshadow his own life.

“I hope I can put to sleep once and for all the old fallacy that wilderness is for the elite, and that only the young and the able are to go into it.”

Birkner has been putting his feet where his mouth is ever since. He does 100 push-ups each morning and walks 30 miles a week between sojourns to keep in shape. Doctors tell him he has the physical conditioning for a man half his age.

His No. 1 tip for hikers? When it’s apparent you’re lost, don’t push blindly ahead. Retreat to the last point where you know for certain you were on the trail.

Whenever possible, he schemes to hike in good weather. “I think the world is more beautiful when the sun is out,” he says.

Birkner has an encyclopedic recall of his collection of more than 100 hiking guide-books. Here are some of his favorite treks.

MAGNOLIA: Birkner lives in this Seattle enclave, which he calls “the most beautiful urban neighborhood in America, maybe the world. Plenty of beaches and incredible views. When I go out for a walk, I see maybe three or four people, when I should be seeing hundreds.”

DEATH VALLEY: The hottest-ever temperature on earth was recorded here in summer, “but for ﬁve months out of the year, beginning in November, the weather is wonderful and there are a lot of interesting hikes.”

PALM SPRINGS: “One of the great hiking centers in the world, and ﬁve nonstop ﬂights daily from Seattle. At 10,500 feet, Mt. San Jacinto is one of the greatest escarpments anywhere on earth.”

CANARY ISLANDS: “I had intended this as a stopover, but it was so lovely, I stayed ﬁve weeks. It’s a special world unto itself, virtually unknown to Americans.”

SOUTHEAST OREGON: This vast region has Birkner’s vote as the Northwest’s undiscovered gem. “It’s one of the most sparsely populated areas in the Lower 48. Make sure your tank is full of gas.”

Birkner’s niece, Nancy Goldfarb, calls him “colorful” and “quirky” and compares him to the itinerant character Waldo. “You never know where in the world he will appear,” Goldfarb says. “But I can always count on receiving a photo of him atop a summit somewhere.”

Want to go on your own hike? Here are some local resources:

The Washington Trails Association provides a comprehensive list of Puget Sound-area resources for those looking for hiking clubs and information. WTA is a nonprofit that helps hikers explore, steward and champion trails and public lands. This list is compiled as a resource and WTA does not endorse any of the groups listed.

SEATTLE MOUNTAIN RUNNING GROUP: A group of long-distance runners who get together for
group runs in the mountains near Seattle (Facebook.com/groups/seattlemountainrunners).

OUTDOOR AFRO SEATTLE: A community that reconnects African-Americans with natural spaces and one another through recreational activities such as camping, hiking, biking, birding, fishing, gardening, and skiing (Meetup.com/Outdoor-Afro-Seattle).

SNOQUALMIE VALLEY TRAILS CLUB: Based in Issaquah and offers hikes, snowshoeing and other outings for members (Snoqualmievalleytrailsclub.org).

WASHINGTON ALPINE CLUB: A volunteer-led organization providing climbing and snow-travel classes. In addition to classes, members organize climbs, hikes and ski trips among themselves. The WAC also owns Guye Cabin located at Snoqualmie Pass, which is available to all members
(Washingtonalpineclub.org).

OUTDOOR ASIAN: Outdoor Asian has a vision to create a diverse and inclusive community
of Asian and Pacific Islanders in the outdoors. The group does local hike outings and workshops, among other activities (Outdoorasian.com).

This story appears in the July-August combo issue of Seattle magazine and Seattle Business magazine. Subscription information is here. The pandemic threw a lot of plans off course, but it didn’t cancel alpine wildflower season, bright yellow autumn larches or mountain waterfalls. Despite social distancing guidelines, there’s no better time to escape to nature. Studies show…

Snoquera Falls; Cutthroat Lake in the North Cascades; A biker on the Olympic Discovery Trail at Olympic National Park

Chasing Waterfalls on the Olympic Peninsula

This article appears in print in the March 2020 issue. Click here to subscribe. Due to the COVID-19 outbreak, many of the restaurants and places mentioned will be closed and/or offering to-go only. Turn this weekender into a day-trip by leaving early, packing your own food, picking a waterfall and staying safe by following health guidelines as recommended by WA-DOH….

It’s November and shorter daylight hours mean shorter hikes. If you’re not quite ready to bring out the snowshoes and full winter gear, it’s also a good time to explore the lower elevation hikes. Late October brought a round of early snow to the mountains, and closed off a lot of trails close to Seattle…

This hike is a tough climb, but a great swan song for the general hiking season

October is the greatest month for hiking. A hike on a beautiful fall day in the Pacific Northwest is the payoff for all the summer hikes leading up to it, and the incentive that keeps you dreaming all winter of getting back on the trail, if you’re not into the snowy and cold variety of…