The Danish Know How to Rock a Spectacular Summer House 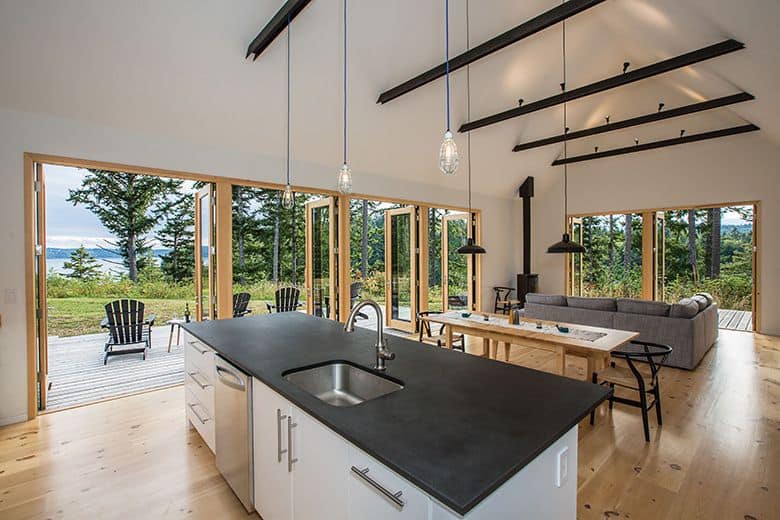 For a Seattle couple (who wish to remain anonymous), their peaceful summer cabin merges their childhood experiences. The wife’s parents are from Denmark, and the husband grew up on the Gig Harbor peninsula. “His dream and hope was to have a place on the water,” says the wife. “My heritage was going to Denmark to see my extended family, where I experienced the lovely thing that is a sommerhus,” or summer house. “Everyone heads out there in summer and hangs out. It’s about being together and eating good food and drinking wine and relaxing.” Leisure time at the beach is often part of the summer house experience.

With two teenagers and two busy careers, the homeowners yearned for their own summer house, one that was close enough to Seattle for weekend getaways year-round. They found their property in 2013 and over the period of a couple of years, camped out in a trailer during visits to the site to get a feel for the landscape.

The couple interviewed several architects, but connected best with Geoff Prentiss of Prentiss Balance Wickline Architects, who visited the property to determine where to situate the house to capture the best views. They were pleased that the firm’s vision brought the outdoors in. “We wanted a physical connection; to be able to open the doors and feel like we were living outside,” says the wife. 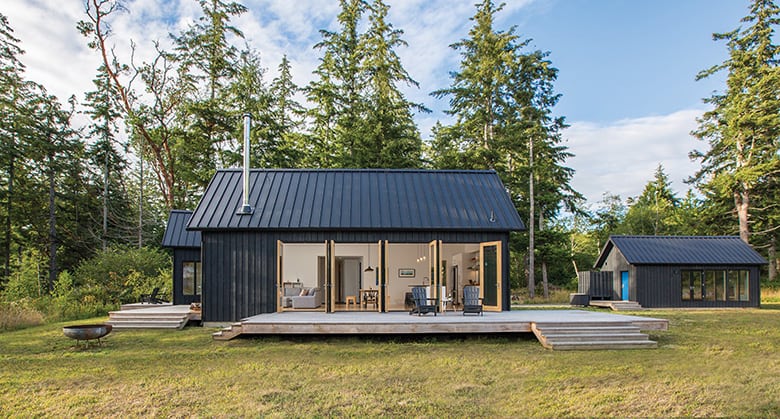 The home, located on Hood Canal near Dabob Bay, was completed in 2016. It’s surrounded by a varied landscape that includes woods, a meadow, a bluff and water access. Dan Wickline was the principal architect of the 1,300-square-foot main house, which has a small loft and an additional gabled structure containing the master bedroom—giving the appearance of two connected buildings. There’s also a detached, 420-square-foot bunkhouse. According to the homeowners, the relatively small footprint still accommodates frequent visits from friends and family, with air mattresses and futons supplied in the main house and additional sleeping arrangements for guests on four bunk beds in the bunkhouse.

Wickline says the design borrows from the Danish sommerhus not only in spirit but also in aesthetics, with gabled roofs and a dark painted cedar exterior. Inside, white painted sheetrock and pine provide a cheerful contrast, and a woodstove in the living room draws family and friends to gather there on cool evenings after a long day outdoors. Wickline also drew up plans for a future boathouse with a rustic kitchen and kayak storage. (The homeowners currently keep a small motorboat at a nearby marina.)

Finding ways to economize was important to the couple. “We designed efficient forms that are easy to build, and used relatively inexpensive sheetrock and pine for the interior,” says Wickline. Instead of large sliding doors, he used a series of French doors—a less expensive method to connect to the outdoor space—while the kitchen was sourced from Ikea, with modifications. Conveniently, the economy inherent in repeating forms, such as the equally proportioned gables and windows, as well as other details, also creates a “calm and simple” feeling, says Wickline—appropriate for a place designed for relaxation and escape.

The house has connected the owners to the landscape in just the way the architects and owners had hoped. “There’s a beautiful sense of sky and earth and forest and water all right in this nice little view,” says the wife. And when the view becomes too enticing to resist, visitors can stroll to the beach, just like families do in Denmark.

This thoughtfully sited and detailed home was selected by a panel of architects for the AIA Seattle (aiaseattle.org) Home of Distinction program as an example of a rural retreat that invites its visitors to unwind in its “great room”—a natural gathering place that spills out to expansive decks and opens to the tranquil landscape beyond.