The Best New York and Chicago Style Pizza in Seattle

Volumes could be—and have been—filled based on people’s regional pizza preference. Our philosophy: Why choose when we have access to so many options 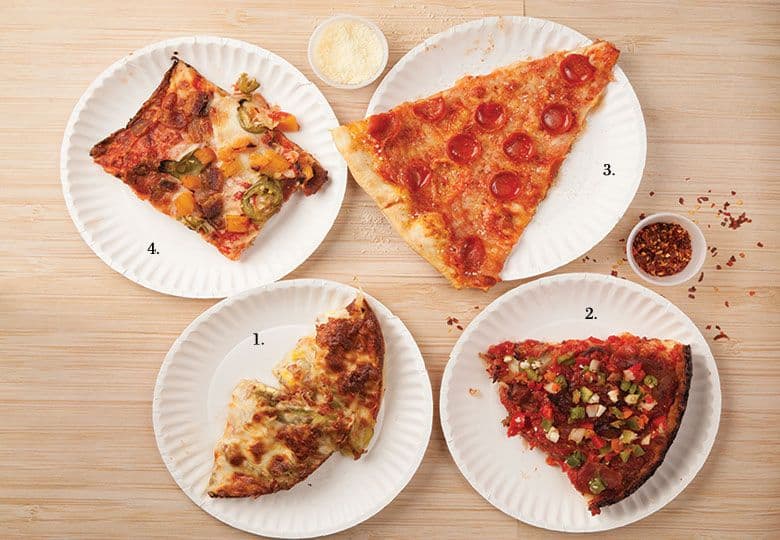 1. Bill’s Off Broadway
Midwest
Unlike these other places that serve pizza exclusively, Bill’s has a whole menu of additional sandwiches and entrées that match the sports bar vibe. It’s a popular destination for brunch foods any day, served until 2 p.m. to allow for the latest hitting hangovers.
What To Order: Bill’s breakfast pizza ($11) is the closest we could find to those Midwest egg-and-sausage-topped pizzas. (There’s a vegetarian version as well.)
Bill’s Off Broadway, Capitol Hill, 725 E Pine St.; 206.420.7493

2. Windy City Pie
Chicago
Windy City Pie owner Dave Lichterman is our local reigning king of deep dish for good reason—his hefty pies, rimmed in caramelized cheese, are the real deal. Though his heart belongs to the Chicago icon, he’s in the process of branching out to offer Detroit-style slices, which have an airier crust, fewer toppings, and are layered with a combo of brick cheese and mozzarella.
What To Order: The Sweet Pete ($27), covered in the house-made hot giardiniera and candied bacon.
Windy City Pie, Interbay, 1417 Elliott Ave. W; 206.486.4743

3. Big Mario’s New York Style Pizza
New York
There is a time and a place for that New York–style, thin-crust slice so big you need both hands to maneuver it—and that time is usually after a few too many drinks. Big Mario’s is there to help, with locations on Queen Anne and Capitol Hill, and in Fremont, as well as delivery, when you’re not within stumbling distance.
What To Order:  Pepperoni ($3.50/slice or $20/pizza), pure and simple.
Big Mario’s New York Style Pizza, Multiple locations

4. Dino’s Tomato Pie
New Jersey
You can take the boy out of New Jersey and give him a very successful, sophisticated Northwest pizzeria, but you can’t make him stop missing the pizza taverns he grew up in. Delancey’s Brandon Pettit opened the dark, fun-loving Dino’s in homage to his favorite New Jersey haunts and their thick, square, Sicilian-style slices of pizza.
What To Order: The Weekend at Dino’s ($24), which has Zoe’s bacon, pineapple, house-pickled jalapeños and enough cheese to hold it all together.
Dino’s Tomato Pie, Capitol Hill, 1524 E Olive Way; 206.403.1742