Riding a streetcar in the 1930s was nothing like today 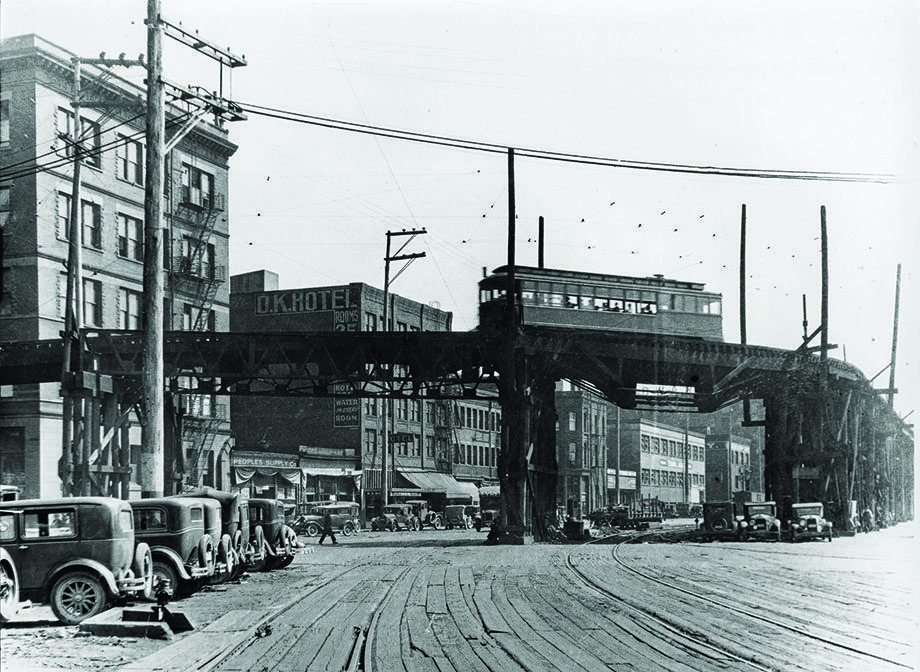 Seattle has a mixed history with transportation solutions. A new book, “Seattle’s Streetcar Era, An Illustrated History, 1884-1941,” details almost six decades of Seattle’s streetcars, from the 13 private companies that once ran streetcar lines to one of the nation’s first publicly-owned transportation systems. The author, Mike Bergman, is well-versed in both transportation and history. He worked for King County Metro and Sound Transit for more than 35 years, and serves as president of the Tacoma chapter of the National Railway Society.
“Seattle’s Streetcar Era” is available through bookstores nationwide, direct from WSU Press at 800-354-7360, or online at wsupress.wsu.edu. Here is an excerpt (text is as it appears in the book).

What was it like to ride a Seattle streetcar during the 1930s?

To find where to board, passengers looked for a “Car Stop” sign attached to the overhead trolley span wires. Tracks were located in the middle of the street, so passengers waited on the sidewalk and stepped into the curb traffic lane to board when the streetcar approached. Some stops had small “safety islands” where lane markings diverted traffic around a designated passenger loading area by the tracks.

The wait for a streetcar wasn’t long. Even during the height of the Great Depression, most individual streetcar lines ran every ten to fifteen minutes during off-peak periods, and more often during weekday rush hours. The Alki, South Seattle–Nickerson, and Sunset Hill routes had the longest wait, with a car every twenty minutes. At locations where more than one route shared the same track, service was very frequent during all time periods. At Broadway and East Pike Street, for example, five routes converged and there was almost always a streetcar in sight.

Passengers boarded at the front of the streetcar and deposited their fares in a cashbox by the operator. Each fare paid was recorded by a fare register, which rang every time the operator pulled a cord. The adult fare in 1935 was 10 cents cash or three tokens for 25 cents; children rode for 3 cents, and ten tokens cost 25 cents. The operator would give change, sell tokens, and provide a free transfer good for travel on other Municipal Railway streetcars or buses if used within one hour. In addition, Municipal Railway transfers were valid on Seattle and Rainier Valley Railway streetcars and vice versa under an agreement with that company.

Once on board, passengers generally found a seat during off-peak periods. In 1935, standees were largely confined to the rush hour commute and special event times. Passengers faced forward on seats made of either wood or wicker, in contrast to the more comfortable leather or fabric seats found on Presidents’ Conference Committee streetcars and contemporary buses. The car would start off with a jerk and would reach a cruising speed of about twenty-five miles per hour. The ride quality and noise levels depended heavily on the maintenance of individual cars and the condition of the track. Unfortunately, the Municipal Railway fell behind in both areas during the 1930s. At its worst, cars would tend to move abruptly back and forth where rails were slightly out of gauge, and loud noises would come from gears, whining traction motors, and worn rail joints. These noises, heard both inside and outside the cars, were particularly loud when going through track switches and crossovers. A well-maintained lightweight streetcar running on good track rode smoothly and created a minimal amount of noise, but this experience had become the exception rather than the rule by the late 1930s.

When passengers approached their destination, they walked to the front of the car and requested the operator to stop. No buzzer or bell was provided to signal the operator, and boarding passengers sometimes had to wait for others to deboard.

The quality of Municipal Railway operating employees was outstanding. In consultant John Beeler’s 1935 report, he noted: “Scarcely without exception, the operators were careful and alert in negotiating hills and heavily traveled street intersections. We found them to be uniformly courteous and helpful, especially to little children and elderly and blind patrons. As an example, instances were noted where blind patrons leaving the cars were conducted safely to the sidewalk by the operators.”