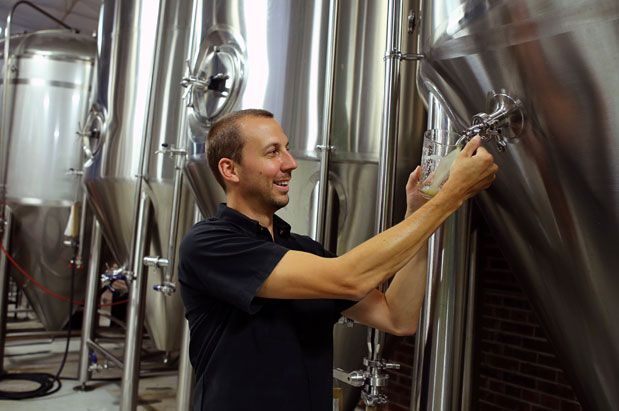 It’s surprising that, with its deep, rich history, hard cider hasn’t had a more prominent place in the artisan drinking revolution. As we’ve reached into the past for cocktail influences, cider has been a bit overlooked, especially considering it was the premier Colonial beverage. But recently, a bevy of small-batch cider makers are crushing it, turning Seattle into a fledgling cider mecca.

Seattle hasn’t had a cidery since Prohibition, but this situation has been rectified by the opening in August of the Seattle Cider Company. Owner Joel VandenBrink’s story didn’t start as a happy one. Not long ago he learned he has Crohn’s disease, which gives him little tolerance for gluten. As the owner of Seattle’s Two Beers Brewing Company (a much-loved microbrewery in SoDo, where the cidery is also located), he realized that “there will come a day that I will no longer be able to drink my own beer.” This led him, like many other folks who have gone gluten-free, to cider.

Well, that and the fact that Washington is a great place to make cider, thanks to our abundance of delicious apples and other fruit (cider being a fermented alcoholic drink made from fruit in this situation). At its launch, the Seattle Cider Company had two year-round offerings, dry and semi-sweet. Both rely on Washington-grown apples, including Fuji, Gala, Golden Delicious, Granny Smith and Red Delicious varieties. VandenBrink also plans on releasing seasonal ciders, including a pumpkin cider this fall, and a New England–style cider mingling brown sugar, molasses and raisins.

With this dedication to quality and individuality, one matching that of our winemakers, it’s no surprise that a bar focused directly on cider has opened on Capitol Hill. Launched last June, Capitol Cider (818 E Pike St.; FC: 206.397.3564; capitolcider.com) is owned by Spencer Reilly and provides a dedicated spot for cider lovers and those going gluten-free (the food menu is gluten-free as well). The bar has an atmosphere that’s reminiscent of a 1800s New England fishing village pub—an elegant iron chandelier, dark wood, copies of classically styled paintings of nautical war scenes and George Washington—and approximately 15 ciders on draft on its two levels. It also boasts more than 70 rotating ciders in bottles, some of which are available by the glass, and some, only by the bottle. The idea is much like a wine bar, with cider from the bottle served in long-stemmed glasses. And, you can buy bottles of cider to take home for a reduced price. Its selection is replete with Washington state ciders, including some from local stars such as Alpenfire, Finnriver and Tieton, but also features other American, as well as Canadian and European ciders.

Both of Seattle’s new apple-icious destinations, the cidery and the bar, provide a way for Seattle drinkers to reeducate themselves on this once ubiquitous drink. Our local artisan cider makers craft their ciders using all fresh apples, instead of an apple concentrate, which is what the bigger commercial cider makers use. As Tieton Cider Works owner Sharon Campbell says perfectly, most of the public doesn’t realize this difference, and “think they are tasting apples to apples (no pun intended).” If you’re someone who has only sipped mass-market ciders, be ready for a different experience when sipping one of our state’s offerings at Capitol Cider or at home. You’ll find ours less sweet but far more memorable, with a mosaic of flavors in every sip. Our forebears would be proud. Sparkling Pear, Finnriver Cidery
($8.99/500-milliliter bottle)
A fruit duet that really sings, this cider socializes dessert apples with pears, with a result that distributes a fragrant pear bouquet, followed by a flavor that’s like visiting a really good fruit market that provides samples, so that you end up with a lovely apple-pear combo in the mouth. Deliver it with pastries in the morning or a nice tart after dinner. Cidery: Chimacum, 62 Barn Swallow Road; 360.732.6822; finnriver.com

Ember, Alpenfire
($17.25/750-milliliter bottle)
This enticingly bittersweet cider is made from late-season French and English apple varieties, and it has a European aperitif nature and a delicate effervescence, making it a nice pre-meal libation. The tannic apple personality is bolstered by intimations of citrus and earthiness. Serve it before dinner alongside Italian cheeses. Cidery: Port Townsend, 220 Pocket Lane; 360.379.8915; alpenfirecider.com

Barrel-aged Cidermaker’s Reserve, Tieton Cider Works ($9.99/750-milliliter bottle)
This is a celebratory cider, from its lovely champagne color to the vanilla, oak and apple that mingle in a delightful and extraordinary manner on the tongue, to the plum tickling the nose. The signature nature comes from the cider being aged more than two years in bourbon barrels. It’s best by itself served well chilled. Cidery (open by appointment): Tieton, 321 Humphrey Road; 509.673.2880; tietonciderworks.com

Dry cider, Seattle Cider Company (not pictured)
($11.99/four 16-ounce cans)
With zero percent residual sugar, this is a very dry cider in a classical style. The dryness doesn’t equate to a lack of flavor, however, as it still has a refined apple nature underlined by notes of stone fruits and a light tickle of lilac on the nose. It’s a cider that can stand alongside a steak or a strong blue cheese without losing the flavor battle. SoDo, 4700 Ohio Ave. S; seattlecidercompany.com

Semisweet, Seattle Cider Company (not pictured)
($11.99/four 16-ounce cans)
Just because this is the sweeter sibling of the dry cider variety, don’t expect any teeth-rotting sugariness, as this cider doesn’t stray toward the candy aisle. Instead, it offers a smidge of sweet, surrounded by citrus and small wafts of spice, alongside the apple. It’s a good cider for sipping, but also works well when used in cocktails. Details above.