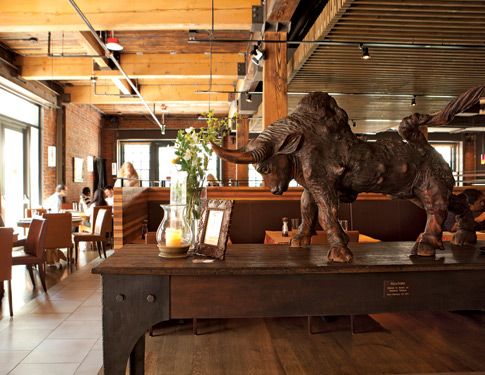 It surprises me to say it, but I do believe we may have the old Tom Douglas back.

Ignore the so-so start that Douglas’ South Lake Union Tibetan dumpling joint, Ting Momo (opened in April; see my review on page 44), has had. And forget for a minute his rocky dining concepts at Pike Place Market (especially the overpriced and underperforming Seatown Rotisserie, which has been “reimagined” as a Rub With Love Shop). At the Terry Avenue Building in South Lake Union, Seattle’s preeminent restaurant magnate has hit two out of three balls out of the park.

I wrote about his other home run, the raucous Brave Horse Tavern—with its great burgers, snappy-skinned, beer-boiled pretzels and fun vibe—last month. But it’s Cuoco (Italian for “cook”) that brings back memories of Douglas restaurants past: the gilded age of Palace Kitchen and especially Dahlia Lounge, where the menus went (and to some extent still go) beyond the trends of the day to step forward, push in new directions and gently challenge diners’ palates.

At Cuoco, there is a true focus: Italian, family friendly, but definitely not dumbed down. Handmade pastas are the headliners, and in a hiring coup, Douglas lured in pasta whiz Stuart Lane—formerly of the marvelous Café Juanita—to lead the pasta-making program here. And the pastas are perfectly lovely. The essence of craft pasta is perhaps best tasted in a dish of buttered tajarin (tie-ya-REEN, $13), fine strands of pasta made from a yolk-yellow dough and hand-cut into thin strands that embody the term “angel hair” in texture and in weight. The hand-cutting gives the pasta just the slightest roughness around the edges, which holds the sage-kissed butter and tickles the tongue just a bit—that is, if you can manage to eat it slowly enough to notice. 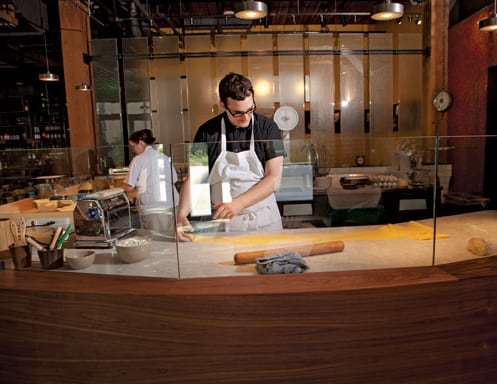 Pasta whiz Stuart Lane’s hand-cut creations hold onto the sauce. Below Right: The plin at Cuoco: sagey and sublime

The best pasta I tasted was a sublime spring lamb ravioli ($18), intensely gamey in the best way and dressed with simple confidence: just fresh, firm spring peas, shaved Romano, young garlic, spring onions and the sheen of seasoned olive oil. (It’s likely the accompaniments will have changed by the time you read this, but if the lamb ravioli is still on the menu, by all means order it.)  I also adore the plin ($19), a dish made famous at The Palace Kitchen many years ago and one that’s featured on both Palace’s and Cuoco’s menus today: tiny folded envelopes of pasta wrapped around a fingernail-size filling of rabbit and veal, with marjoram giving the pasta a lovely ashy-sagy accent. It is still just plain delicious. Especially so with a glass of an off-dry Italian red; Cuoco’s sommelier, Chet Hausken, formerly of Dahlia Lounge, has designed a list chockfull of them, with many in the $35 to $50 range.

We made our way to the pastas via salads and antipasti that showcased late-spring farmers’ market finds during my visits: local fava beans with mint ($13); beets and their own greens and stems with the occasional hunk of Gorgonzola for contrast ($12); Burrata, mozzarella’s seductive, cream-centered cousin, with figs and olive-topped crostini ($12). If I were in a mood to make a meal of vegetables, antipasti, cheeses, crostini and salads, I’d be beyond pleased to do so at Cuoco, especially given the late-summer produce surely starring on the current menu.

Many diners bring their young but well-behaved children to dinner at Cuoco, I noticed—kids love pasta, after all. In fact, it feels like the kind of place you’d want to invite a larger group; service has a friendly, approachable ease to it. With its warm lighting, exposed brick walls and unfinished wood ceilings, as well as banquette seating along several half-walls, Cuoco is just the sort of place where ordering family style feels right—the more the merrier!

And it makes indulging in a final course inevitable, in a good way. The pan-seared halibut ($28) is perfection, its soft, moist flesh sliding apart with a touch of the fork. Even better in my mind: the dry-aged rib-eye ($30 for 12 ounces; $55 for 24 ounces). Given a panzanella-like treatment, it arrives exactly as ordered (just a smidge on the rare side of medium-rare) and tender beyond words, surrounded by hunks of grilled Campagne bread, roasted peppers, arugula and grilled onions. Next time, though, I’ll ask for the steak to be served alongside rather than amongst all the rest; the balsamic vinegar in the vegetables’ dressing diminished the meaty flavor of that serious steak. 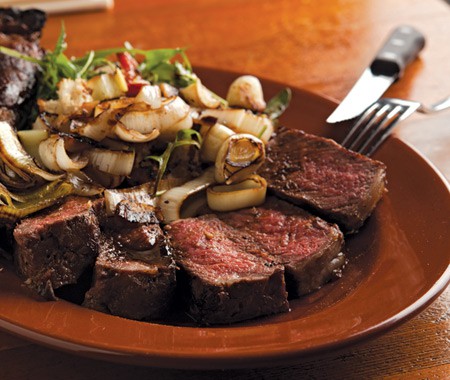 But then, Tom Douglas hasn’t built his name and fortune on the backs of subtle flavors and quiet pleasures. And so at Cuoco we get a little of the Tom we know and love—the big-boned, full-flavored steak—and a little surprise: understated pastas that let the fine craft of their making do the heavy lifting, no bells or whistles in sight. It feels a bit like hearing a story you’d never heard before from a close friend, a parent or a lover. And it’s a happy surprise to know there’s more to learn about a guy you already pretty well like.