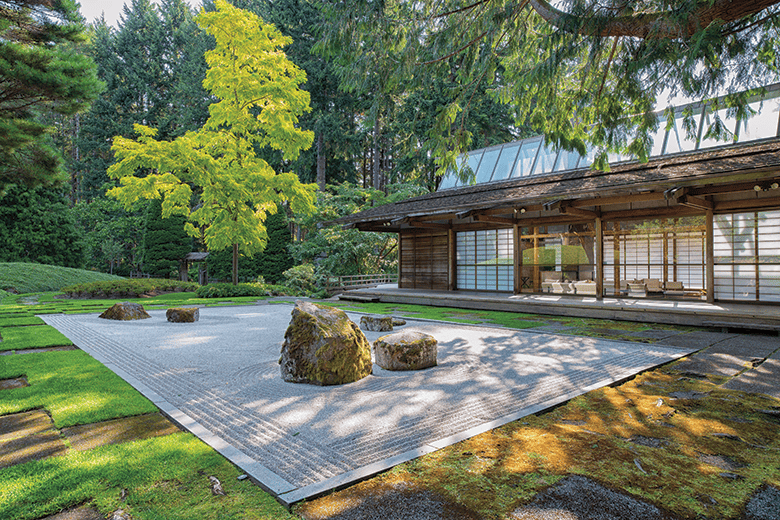 For The Newcomer
Let the meticulous arrangements of flora, water and rock soothe your soul at the picturesque Seattle Japanese Garden, a 3.5-acre spot on the south end of the (also lovely) Washington Park Arboretum. Even better, make a reservation to experience chado, a traditional tea ceremony ($10; dates vary, May–October) in the garden’s teahouse. $6. Madison Park, 1075 Lake Washington Blvd. E; 206.685.4725; seattlejapanesegarden.org

For The Master Gardener
You won’t find a lot of colorful flowers at Bainbridge Island’s grand 150-acre Bloedel Reserve. Instead, a looping trail takes you through 12 gardens that show off intricate textures, dramatic shapes and subtle shading—including a lush moss garden with 40 different species, a Japanese garden and guesthouse, and a serene bird marsh. The property was a gift to the University of Washington (which managed it until 1985) from lumber heir Prentice Bloedel and his wife, Virginia. Prentice was an environmentalist at heart, and colorblind, so many gardens feature plants with different textures and shades. The most colorful garden here is The Glen, which has Virginia’s favorite plants and includes more than 100 rhododendrons, a riot of bloom in the spring. $17. Bainbridge Island, 7571 NE Dolphin Drive; 206.842.7631; bloedelreserve.org

The Sightseer
Get a bird’s-eye view of the city from the Seattle Great Wheel, perched over Elliott Bay at Pier 57. As the big wheel slowly rotates, you get to take in the Olympics, Puget Sound and the city. Each pod holds eight people, and three revolutions can take anywhere from 10 to 20 minutes. Buy tickets in advance online to avoid summer crowds. $14. Waterfront, 1301 Alaskan Way (Pier 57); 206.623.8607; seattlegreatwheel.com

Local Lookouts
Neighborhood nooks, from the top of hidden stairways to pocket parks, are among the best (and free!) viewing spots. Queen Anne’s Kerry Park looks over a postcard-perfect panorama, with the Space Needle in the foreground, downtown draped behind it, Elliott Bay stretching to the right, and Mount Rainier in the distance. A 1971 steel sculpture on the site, “Changing Form,” perfectly frames the view (and is a favorite with kids, who love to climb on it). Head to the other side of Elliott Bay to West Seattle’s Belvedere Park for a completely different perspective of the city. Take in the city skyline, from Smith Tower to the Needle; in the evening, its sunset view is worthy of chasing down with your camera.

The Puppy Playground
Give your pup something to bark about at the city’s largest fully fenced off-leash area, Magnuson Park. The 8.6-acre park sits next to Lake Washington, and it’s the only one in the city that allows water access to dogs. Follow the trail and you and your dog will be rewarded with a cool dip in the lake and a view across to the Eastside. 7400 Sand Point Way NE; 206.684.4075; seattle.gov/parks

The Doggie Destination
Locals looking for new haunts to enjoy with Fido will love Double Bluff Beach, on the south end of Whidbey Island. Part of the beach is off-leash, and your dog can search for sticks while you shuffle your toes through the sand, collect cool rocks and shells, or check out the kiteboarders gliding and floating on the waves. Whidbey Island, Freeland, 6325 Double Bluff Road; visitwhidbey.com

Blanket Central
Watch boats great and small get lifted and lowered on their travels to and from Puget Sound at Hiram M. Chittenden Locks (aka the “Ballard Locks,” celebrating its 100th anniversary this summer). Pack a lunch or stop at Seattle icon Red Mill Totem House, across the street, to pick up a burger or fish ’n’ chips; once you’ve seen the locks in action, picnic in the Carl S. English Jr. Botanical Garden. From May to September, there are weekend concerts beginning at 2 p.m. on the lawn beside the locks. Ballard, 3015 NW 54th St.; ballardlocks.org

The Secret Garden
Spread out your blanket at Parsons Gardens, a hidden gem. The picturesque garden on the south slope of Queen Anne will shelter you from the summer bustle with just enough room for a picnic for two in the shade of sculptural trees. Queen Anne, 650 W Highland Drive; seattle.gov/parks

The Selfie Spot
There’s no toll to go past the Fremont Troll, a hulking concrete sculpture underneath the Aurora Bridge, clutching an old VW Bug. Rather than merely pass the creature, kids and adults alike can’t resist climbing on him, while mugging for the camera and a classic Seattle landmark shot. Fremont, Troll Avenue N and N 36th Street; fremont.com

The Shore Thing
Lady Liberty’s miniature replica welcomes you to the shores of Alki Beach, which in summer is teeming with visitors walking or pedaling along the boardwalk, or playing volleyball on the sand. West Seattle, 1702 Alki Ave. SW; seattle.gov/parks

Welcome To The Jungle
Just one visit to Woodland Park Zoo probably won’t do it. There’s a lot to experience here, whether you’re looking to check out the newest exhibit of Malayan tigers or would prefer to immerse yourself in butterflies, feed parrots or watch a giraffe crossing. Once you’ve seen them all, settle in for ZooTunes, a series of live music concerts at Woodland Park that runs throughout the summer. Prices vary. Phinney Ridge, 5500 Phinney Ave. N; 206.548.2500; zoo.org

Head Out On Safari
Small but mighty is Issaquah’s Cougar Mountain Zoo, which works with endangered species and includes a large Siberian reindeer herd, as well as macaws, tigers and cougars. At Tacoma’s Point Defiance Zoo and Aquarium, the red wolves are part of a nationwide conservation program; this is also the only zoo in the Northwest to offer camel rides. A slew of renovations this year adds special exhibits and the Wild Wonders Outdoor Theater: See Herald the Wonder Dog ride in on a hot air balloon to lead other animals—a clouded leopard, an aardvark and a bald eagle, among others—in adventures on stage.

Major Players
In this baseball-crazy town, it’s practically a rite of passage to take in a Mariners game at Safeco Field, preferably on a clear, warm summer night when, between innings, you can enjoy a spectacular sunset over Puget Sound from one of the stadium’s viewpoints. Enjoy the eclectic food offerings, including lots of local fare, from bacon-wrapped hot dogs at Edgar’s Cantina to Liège waffles from downtown’s Sweet Iron Waffles, along with plenty of familiar microbrews, wines and even craft cocktails. Game times and ticket prices vary. SoDo, 1250 First Ave. S; 206.861.2200; seattle.mariners.mlb.com 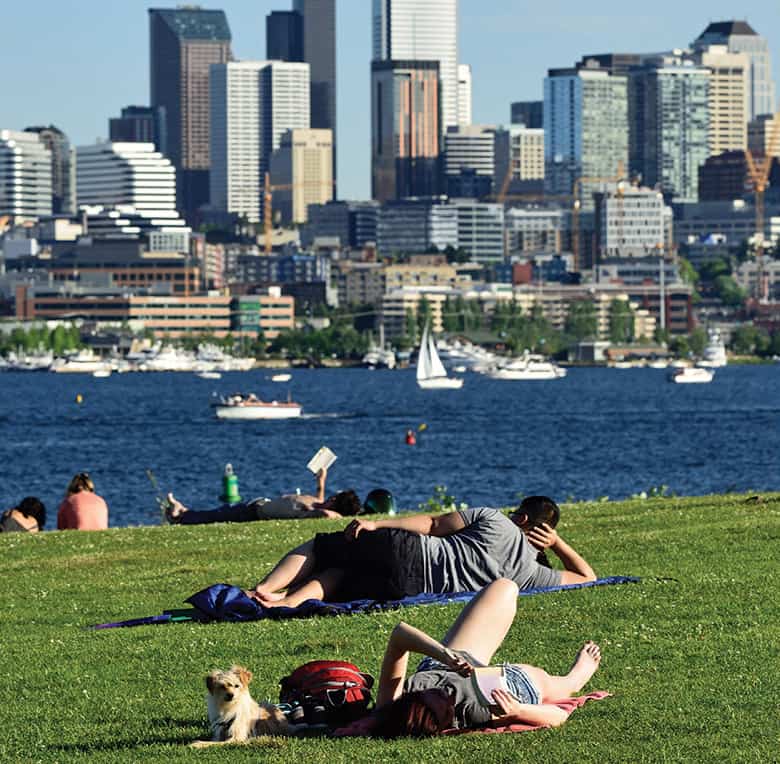 Family Room
The grassy hilltop at Gas Works Park, the site of a former Seattle Gas Light Company plant on the north shores of Lake Union, offers a comfortable spot to soak in the sun as well as stunning views of the city. On July 4, it’s the hottest ticket in town for the annual fireworks show over Lake Union. Free. Wallingford, 2101 N Northlake Way; 206.684.4075; seattle.gov/parks

First Time Visit
Hit the choppy waters of the Salish Sea off the San Juan Islands for a chance to spot orcas, humpbacks, sea lions and eagles. Some operators offer a complimentary second ride if you don’t spy a whale on your first go. Prices vary. Numerous operators, including pugetsoundexpress.com, clippervacations.com, seattleorcawhalewatching.com and sanjuansafaris.com

Insider’s Tip
Explore the city on a do-it-yourself mural tour. In the historic Central District, an expansive mural on the walls of Seattle Central Community College’s Wood Construction School (2310 S Lane St.) celebrates the neighborhood’s multiculturalism and activism; a portrait of a contemplative Martin Luther King Jr. is on the side wall of beloved but now shuttered Catfish Corner (2726 E Cherry St.); and a mind-bending image of a skull, deep-sea diver and a ship with a hoisted flag proclaiming the Twilight Exit bar (2514 E Cherry St.) grabs attention. Explore farther into surrounding neighborhoods. seattlemurals.org