Where to Find Japanese Comfort Food and other Asian Delectables 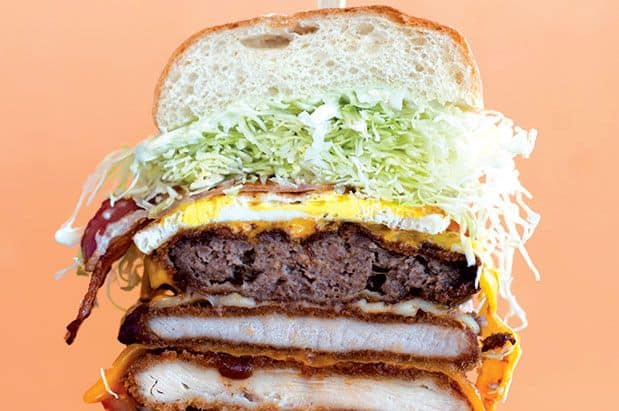 Sometimes when people talk about Americanized food from ethnic cultures—the chimichanga, General Tso’s chicken, etc.—there’s a kind of derogatory subtext that implies these dishes can’t possibly be tasty because they aren’t authentic (so not true).

But Seattle’s current wave of yoshoku (a Japanese word referring to Asian-style interpretations of Western comfort food) restaurants turns this idea on its head. Imagine a culinary game of telephone: European and American comfort-food dishes like pasta and curry reimagined for Japanese palates in Japan, then brought back to America by Japanese craving a taste of home. Confused yet?

Give one of these places a try and you’ll understand there’s more to Japanese restaurants than ramen, soba and sushi.

Katsu Burger
Crowds went crazy at Katsu Burger’s original Georgetown location when it opened in 2011, lining up for panko-crusted, deep-fried burgers—a nod to the popular Japanese dish katsu (breaded cutlets)—topped with a variety of Japanese-inspired sauces, from curry mayo to miso honey mustard. And after a brief 2014 shuttering, sale and reopening (with recipes intact!) of the first spot, Katsu Burger has expanded its empire, first to Bellevue, and most recently to a corner suite in the Lynnwood strip mall next to the Regal Alderwood movie theater. Lorded over by a mural of Godzilla and Mount Fuji, visitors to the colorful diner gorge themselves happily on burgers easily three times the size of anything you’d get at burger chains in Japan, where burgers are typically tiny. And that’s not even counting the Mt. Fuji: a nearly $20 “mega-burger” that involves beef, pork and chicken patties, three kinds of cheese, a fried egg, bacon, wasabi mayo and sweet, vinegary tonkatsu sauce. The sides, too, shouldn’t be missed, particularly the spicy-sweet, nori-flecked, 12-spice fries. Lynnwood, 3333 184th St. SW, Suite B; 425.622.4500; katsuburger.com

Suga
When Eriko Sugawara took over the former Dot’s Delicatessen space, she wanted to create the sort of homey Japanese restaurant that fellow Japanese people would frequent—as opposed to the ultra-Americanized dinner-and-a-show experience of Benihana, the downtown franchise she’s owned for nearly 20 years. She changed very little about the space aesthetically; there are still the high-backed, blond wood bench seats, and the glass case that formerly held cuts of meat now holds cases of imported beer and sake. The menu, however, is all her own: slow-cooked curry sweetened with mango and pineapple ($15; try it on the Hawaiian-style loco moco or with pork katsu); fluffy egg omelet atop chicken fried rice (a simple dish known as omurice; $14), house-made gyoza ($6), and a variety of donburi, or meat dishes over rice ($12-$15). Happy hour—Tuesday–Friday, 4–6 p.m., and Saturday, 2–4 p.m.—offers discounted appetizers and drinks. Fremont, 4262 Fremont Ave. N; 206.695.2250

Hurry Curry of Tokyo
This LA transplant opened in January in the Ninth Avenue corridor in South Lake Union, an area that’s received an extreme culinary makeover over the past few months. The concept is simple: quick food (great for the nearby office lunch crowd) in a traditional-meets-modern environment modeled after the many curry houses in Japan. And while the 21-spice curry ($10-$15) is worth a try—the roux is made in Japan and shipped here for the restaurant—there are Japanese comfort food dishes here you won’t find elsewhere in the city, such as corn potage (a creamy corn chowder; $4) and pasuta (“pasta” in katakana, the Japanese writing system used to spell foreign words; $15). What does a Japanese pasta dish look like? The yoshoku take on the Italian favorite includes marinated fish roe, squid, soy sauce and other traditionally Asian ingredients. South Lake Union, 825 Harrison St.; hurrycurryoftokyo-seattle.com

Sandwich House Tres
It’s a takeout spot with a menu that’s seemingly built around the palate of a 3-year-old: crustless sandwiches on pillowy white bread with more than 50 different options available ($2.50-$4.50). There’s even a peanut butter and jelly. But while toddlers will love it, their grown-ups will, too—these sandwiches, though simple, are comfort food to the core. In Japan, convenience stores stock these diagonally sliced sandwiches as grab-and-go fare alongside onigiri (rice balls) and maki (sushi rolls); fillings are usually tuna or egg salad, sometimes ham and mayo, occasionally just sliced cucumber. Here, in a pristine white space with seating for only a few diners, they’ve got these fillings and then some, both savory and sweet: fried croquette, smoked salmon, Korean bulgogi, banana and chocolate cream, and many others. Miss the crusts? There’s a tub of the remnants by the register, so you can fill a bag to go on your way out. Whatever you do, go early, as many are sold out before lunch. Bellevue, 1502 145th Place SE; 425.643.7333; tressandwich.com

Modern
You won’t find any of those kitschy waving cats at this petite Phinney Ridge eatery, which mimics a stylish Tokyo café in its sleek, simple decor and entirely Japanese-speaking staff. Osaka-born owner Setsuko Tanaka moved to the U.S. 10 years ago and two years later launched Setsuko Pastry, a wholesale business supplying local restaurants such as Issian and Kozue (both in Wallingford) with green tea roll cake and other pastries. Now, Tanaka operates her pastry business out of Modern, where she also gets to serve the savory comfort foods she misses from Japan, such as rich house-made curry ($9-$13), available only at lunch because its two-day preparation doesn’t allow for batches big enough to meet dinner demand; donburi, udon and more. Fill up on umami tastes, but don’t forget to indulge in something sweet—the strawberry mochi, when in season, are particularly delightful—from the pastry case up front. Phinney Ridge, 6108 Phinney Ave. N; 206.420.4088; modern-seattle.com