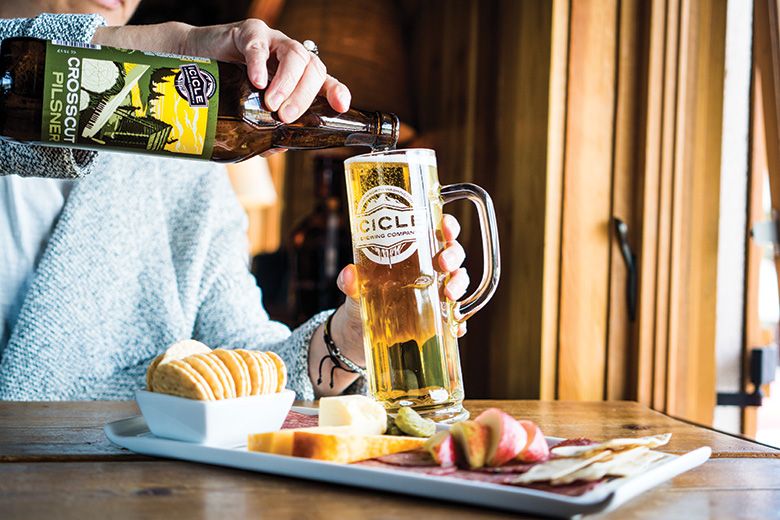 It is remarkable to think about, almost unimaginable. Washington now boasts more than 300 breweries, more than 50 of which are packed within Seattle city limits. Our local brewers are flexing their creative muscle and challenging our palates to accept new flavors, introducing us to things like sour beers, barrel-aged beers and other imaginative concoctions. While doing so, they also continue to hone their skills when it comes to brewing the styles of beer we already love. For our inaugural Beer Awards, we go back to the basics, honoring some of the most celebrated styles of beer made in Washington state and available around the Puget Sound region, presenting you only with beers that are regularly available year around. We also conducted a Readers’ Choice poll, and you can find the results here. Join us for a glass of the winning brews, and you’ll find that these classic styles—pilsner, amber, saison, porter and IPA—have never tasted better.

Best Pilsner
Pilsner is a traditional light-bodied and refreshing European style of beer with a crisp and clean flavor. Those familiar name-brand beers advertised during football games are all pilsners, but none of them are as tasty as the ones our local brewers produce.

Crosscut Pilsner
Icicle Brewing Company
5 percent alcohol by volume
This super-refreshing pilsner is like a brand-new $100 bill: crisp, clean and begging to be consumed. It pours sparkling clear and golden, with a thin white head that smells slightly hoppy and a wee bit bready. Head brewer Dean Priebe created a beer that refreshes the palate with a tactful combination of subtle flavors: just a bit of honey, corn and straw, then the tiniest hint of herbal hop spiciness provides a little pop of bitterness on the finish. Available in bottles at select bottle shops and always on tap at the brewery, where you can get growlers to go.
Pairs with: Use this snappy, bright beer to wash down fresh oysters on the half shell.
Brewery and Taproom (all ages): Leavenworth, 935 Front St. Best Amber/Red Ale
The name is directly related to the beer’s color. Whether you call it amber or red, it’s more sweet than bitter and usually features a rich caramel character.

Ridgetop Red
Silver City Brewery
6 percent alcohol by volume
Saying you like this Bremerton-brewed beer is akin to saying you enjoy vacationing in Hawaii. Who doesn’t? This beer, crafted by brewmaster Don Spencer, won medals at national beer competitions, so it’s no surprise we liked it. Exceptionally well balanced, this red has a subtle bready aroma that gives way to a soft and smooth, caramel-like sweetness complemented by a short-lived but sharp bitterness. Available in bottles and cans wherever good beer is sold and on tap at both Silver City Brewery locations, where you can get growlers to go.
Pairs with: Another simple classic, like a cheeseburger and fries.
Brewery and Taproom (21 +): Bremerton, 206 Katy Penman Ave.
Restaurant and Ale House (all ages): Silverdale, 2799 NW Myhre Road Best Saison
A traditional Belgian style of beer that was originally brewed seasonally for summertime consumption, saison (the French word for season) has become a popular year-round style in America. Pale in color, cloudy in complexion, it has a flavor that is often a bit fruity and even spicy.

The Seer
Holy Mountain Brewing
5.1 percent alcohol by volume
Colin Lenfesty, the head brewer and a cofounder of Holy Mountain Brewing, created a beautiful beer that pours a hazy yellow, with a tight white head. The aroma is a bewitching combination of barnyard funk and herbal perfume that draws the glass irresistibly to your lips. The flavor is like a Jackson Pollock painting: You aren’t sure what it is, but you like it. You might taste lavender, then Chardonnay and tart lemons, along with the foudre (a large, oak, barrel-like vessel) in which the beer is aged for four months. Find The Seer on tap at the brewery’s tasting room in Interbay, where the beer is available in bottles, but not growlers. Occasionally, you might also find bottles at bottle shops around town.
Pairs with: A garden-fresh salad dressed with a bright, citrus dressing.
Brewery and Taproom (21 +): Interbay, 1421 Elliott Ave. W Best Porter
Porter is a traditional style of English beer, beloved for centuries. Though porters come in shades from dark brown to pitch black and balance mild sweetness with hoppy bitterness, they are surprisingly refreshing and light on the palate, given their formidable appearance.

Global Mutt Baltic Porter
Wander Brewing
7.0 percent alcohol by volume
The light brown head that rests atop this pitch-black beer from Bellingham releases an unmistakable coffee-like aroma. In this one, head brewer and brewery co-owner Chad Kuehl presents flavors that are robust but dry, with notes of dark chocolate, coffee and roasted, almost burnt malt. True to its name, Global Mutt presents a mélange of flavors stemming from the use of globally sourced ingredients: fair-trade cacao nibs from the Democratic Republic of the Congo, coffee from Brazil and specialty grains from Europe. Available in bottles at bottle shops and occasionally on tap at beer-focused bars, or visit the brewery in Bellingham to get your growler filled.
Pairs with: Continue the worldwide vibe by serving it for dessert with a traditional Italian biscotti, and don’t be afraid to dunk.
Brewery and Taproom (all ages): Bellingham, 1807 Dean Ave. Best IPA
The hoppiest of all beer styles, today’s IPA are often described with adjectives like fruity, piney, citrusy and tropical, all flavors imparted by the hops. Hands down, it’s the most popular style of craft beer in America.

Jumbo Juice IPA
Airways Brewing
6 percent alcohol by volume
This Kent-brewed beer is big on fruity flavors, with not so subtle hints of orange and tropical fruit, which are actually provided by the use of copious amounts of citrus-forward hops. It pours a slightly hazy yellow, and you might think someone spiked your beer with OJ, but Alex Dittmar, the head brewer and owner, doesn’t want you to be fooled—it’s all beer. Unlike traditional IPA, it is light on bitterness, which makes it immensely quaffable, even for people who usually don’t like IPA. This draft-only brew can be found on tap at both Airways Brewing locations in Kent, where you can get growlers to go, and occasionally at beer-focused bars around the area.
Pairs with: The citrus notes will complement and amplify the spiciness of four-star pad thai, adding more depth of flavor to an already intense dish.
Brewery and Taproom (21 +): Kent, 8611 S 212th St.
Beer and Bistro (all-ages brewpub): Kent, 320 W Harrison St.

Beer Awards Methodology
Seattle magazine’s beer authority and beer awards manager Kendall Jones breaks down how we determined the winners:
For Seattle magazine’s inaugural beer awards, we decided to focus on five of the most common and most beloved styles of beer: pilsner, amber, saison, porter and IPA. The shelves in the beer aisle are crowded these days, so we thought we’d do all of the heavy lifting for you, sampling dozens and dozens of beers so you don’t have to. (You’re welcome.) We included only Washington-brewed beers that are regularly available, because telling you how good a beer is if you can’t drink it would be mean.

To shape our final list of nominated beers for tasting, Jones, who tastes hundreds of Washington beers each year, relied on his own experience and also sought opinions of other industry professionals who do the same.

We also considered beers you can find around the Puget Sound area that caught the attention of beer judges at national and regional beer-tasting competitions.

We then culled the list of beers to a reasonable size for tasting (five or six finalists per category). Jones assembled a tasting panel composed of beer experts: bottle shop owners, bar owners and beer buyers. We also included a chef from a beer-focused restaurant. Since Jones knew which beers made the list, he was recused from the tasting. On March 7, the group tasted the beers blindly, not knowing what beers they were drinking as they scored them on appearance, aroma, flavor and overall impression. The highest-scoring beer in each category is the winner.