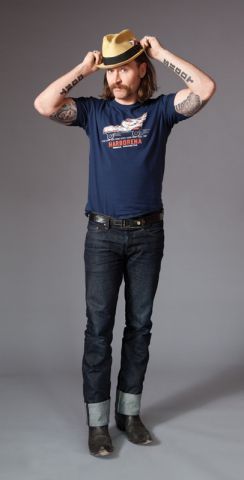 Influences: Having grown up in a booming Aberdeen of the 1970s, when “every day was sunny” and all his girlfriends “tasted like bubble gum and vodka,” Gabe Johnson holds an almost religious reverence for “oil cans, muscle cars and slingshots,” and other blue-collar Americana from the 1940s-’70s, an era when things were made with pride. “I appreciate items that were meant to outlast the maker,” he says.

Personal Style: A self-described ramshackle mash-up of the Great Depression, Hunter S. Thompson and the 1970s. “My mom calls it ‘riff-raff,’” he jokes. Until he found American-made Tellason jeans, Johnson only wore old stock 1970s bellbottoms.

Working Man: Johnson owns Horses Cut Shop, an online store that sells made-in-the-USA T-shirts ($34) with logos from dive bars, taverns and other businesses, such as the Baranof in Greenwood and the Streamline Tavern on Queen Anne, that represent the spirit of mom and pop, the little guy and the American Dream. Johnson gives a percentage of each sale back to the business whose logo it is. He aims to celebrate and support this slice of Americana before it vanishes.

What’s in a Name: No horses were harmed in the making of this business. Johnson is a third-generation member of the Fraternal Order of Eagles, and he likes the idea of animal totems. “Cut shop” is a play on “chop shop,” where stolen cars are dismantled.