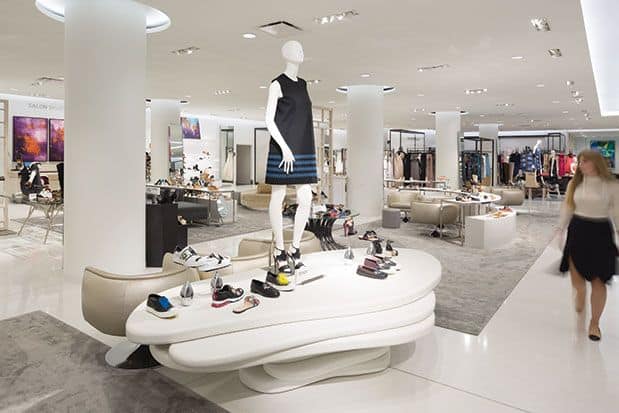 Last February, as Nordstrom’s downtown Seattle flagship was in the thick of a significant renovation, which had begun in spring 2014, there was a moment when you could stand in the center of the store with one foot in the old design and one in the new. To the right: 12-by-12-inch beige marble tile floors, little natural light and office-like ceiling tiles. To the left: a seamless, light-colored terrazzo floor, ample natural light from newly exposed windows that had been shuttered for decades and smooth, white plasterboard ceilings.

“People would swear the ceilings were higher in the new design,” says Dawn Clark, Nordstrom’s vice president of store design, architecture and construction, “but they’re not.” Chalk that perception up to LED technology coupled with new floors that allow light to bounce, just one of the many changes revealed in the store’s facelift debuting this August.

Founded in 1901 as a simple shoe shop in downtown Seattle, Nordstrom is in the midst of a major transformation. And rightfully so. Brick-and-mortar retailers are being challenged more than ever by online shopping, says Eric Feigenbaum, the former chair of visual merchandising at Manhattan’s Laboratory Institute of Merchandising (LIM) College and current president of retail design company, Embrace Design. “Stores aren’t going away anytime soon. But technology is forcing retailers to up their game and give customers a reason to return to the stores. The physical store is where relationships are made and brand loyalty cemented.” 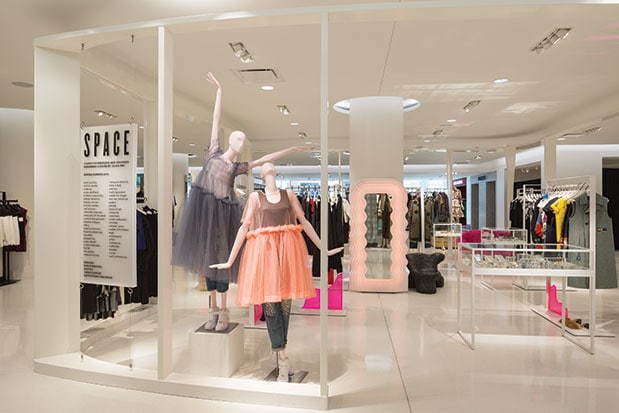 The Seattle flagship is just one of several stores in which Nordstrom is investing to cement that brand loyalty. Last September, the retailer unfurled its brand-new, 230,000-square-foot store in Vancouver, British Columbia—its first international flagship (a term used to define a store that reflects a brand’s best and most innovative experiences not available in other locations) and one of six stores planned to open in Canada through 2017. In the U.S., Nordstrom is set to open its first Manhattan flagship in 2019 and a second, 43,000-square-foot location just one block away.

All of these flagship stores demonstrate Nordstrom’s new way of thinking. “We realized that true flagships are stores that people around the world know,” says Jamie Nordstrom, the retailer’s president of stores, referring to the likes of London’s Harrods and Selfridges. “[Previously] we didn’t think of our flagships as destinations, but as a great store in [each’s respective] city. We realized we should have higher ambitions.”

The changes to the 383,000-square-foot Seattle flagship are in response to what Jamie Nordstrom says is a growing regional fashion and design sophistication and an increase in tourism dollars. “We want to look at all the people who travel here—whether they’re from Ohio or Japan—and say, ‘How can we create an experience that will be relevant to them and make them want to return home and tell their friends about it?’”

Windows that had been previously covered by stockrooms are now exposed, creating a better connection to the outside

That experience begins even before shoppers step inside the Seattle store. Gone is the barrel-vaulted bronze canopy that surrounded the building’s exterior, replaced with a clear glass structure. And the brown granite that clad the exterior wall from cornice to sidewalk has been replaced with new terra cotta, which matches the original light terra cotta above the canopy. Inside, windows that had been covered by Nordstrom stockrooms are now exposed, bringing in mood-boosting natural light and creating a better connection to the streets. 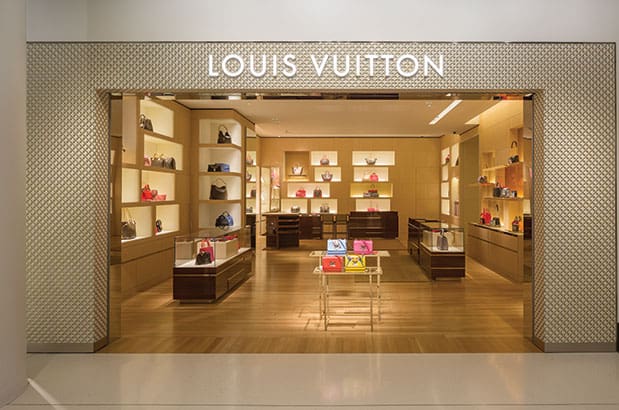 According to Clark, the old layout’s journey-defining aisles and fixed carpet created psychological barriers that didn’t encourage discovery. The new design is aisle-free with a seamless floor, giving Nordstrom the flexibility to shrink or grow a department as business calls for it.

One of the most exciting elements of the refreshed flagship is the addition of a street-level Louis Vuitton boutique within the store. The iconic French fashion label trucked its men’s and women’s leather goods from its former Rainier Square location to its new home on Nordstrom’s Pine Street–facing side. The boutique is neighbor to fellow French fave Chanel, which also has expanded its handbags-and-accessories footprint to a larger, street-facing shop within Nordstrom. Nordstrom has also upped its game with perks like curbside pickup and in-store food and cocktail options, such as the Habitant lounge, perched directly within the shopping environment and offering a prime spot for people watching, and California-based confection shop Sugarfina. It’s all part of what Jamie Nordstrom calls a “thick recipe” that adds up to a flagship experience.

Nordstrom asserts that despite the flagship’s luxe new look, the customer service and selection it’s known for will remain the same.